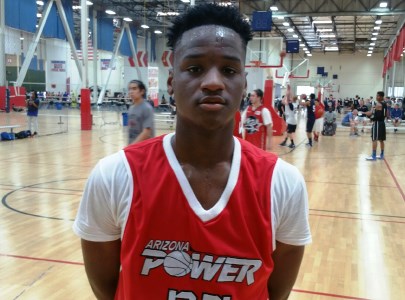 Carter is among the better guard prospects in the 2017 class. A floor general of sorts that has a very good handle and surveys the floor with good court vision. Enjoys running a team and making plays for others. Also a capable scorer that can keep defenses honest with a solid perimeter shooting stroke. Has range on his shot. An excellent ball handler and passer that surveys the floor. An excellent penetrator and finisher. Pushes the ball up the floor. A very good defender with good lateral quickness. A solid guard prospect. A good sleeper prospect.

Spottsville is a strong and well-built young prospect that has a good body and a nice motor. He is a very good scorer in transition, and also is a nice slasher and finisher in the open court. In the half-court set, he can get into the lane and finish or make perimeter shots to set up his drives. Has good range on his shot, but is at his best attacking the basket with the ball on drives. Plays well above the rim when he decides to attack the basket. A good ball handler and penetrator. A solid passer. A very good defender with good overall toughness. A talented guard prospect with nice potential for the future. A football star as well and should play football in college, but is capable of playing both at a high level.

Gueye is a long, athletic and versatile wing prospect with good promise for the future. He has very good versatility as a player and his ability to score inside and outside is a nice attribute to have. A left hander, Gueye is difficult to defend for many opposing wings in the state. He is able to make shots from the perimeter, but needs to improve his consistency from longer ranges. He is at his best when taking defenders off the dribble and making plays at the rim and around the paint. Gueye also is able to play much bigger than his size suggests, as he uses his length to play effectively around the paint, and also score in transition. Gueye's most intriguing attribute is his ability to defend, which makes him very valuable as a player. His same length allows him to play passing lanes and also block/change shots for opposing players. Gueye is able to defend wings and also opposing low post players in high school. At the collegiate level, he will be asked to defend small forwards, wings and off-guards, so he will need to continue to develop his foot speed to stay with athletic wings as he matures physically over the next two years. Physical strength will be very important in his continued development as a player.

Jordan comes from excellent basketball bloodlines, as his father, Billy Jordan Sr., was a big-time prospect back in his day. Jordan is a skilled and tenacious wing prospect that competes at a high level and has great energy on the floor. Jordan has an ability to make plays for himself and others with the basketball in his hands, suggesting that he could develop into a serious point-forward over time. He has good size and length already, and his left-handed skillset makes him difficult to defend for opposing defenders. Has very good versatility. Very good mid-range shooter but needs to improve his consistency from longer ranges. As he adds more consistency to his jump shot, he will be able to open up his game, making him even more difficult to defend. A good defender as a result of his length and aggressive style of play.  Has excellent potential over time.  Needs to add physical strength for the future to improve as a prospect.

Graville is a rare find, as a result of his size, length and ability to make shots from all over the floor. He has a very good shooting stroke with unlimited range, and also a good mid-range game which allows him to make plays for himself off the dribble. Needs to put it all together on the basketball court, and against top-rated competition - the final step in the process of developing into a top performer. Good ball handler. OK passer. A solid rebounder. OK defender.

Brown is a all-around solid guard prospect that is able to score the basketball from almost everywhere on the floor, and also has excellent versatility as a player. He is a good scorer off the dribble and also can catch and shoot with range on his shot. Shoots a high percentage. He has a good handle of the basketball amidst traffic and is able to create for his teammates. A good passer that likes to get his teammates involved. Active rebounder for his size and a good finisher inside the paint. A very good defender with quick hands and plays passing lanes. Solid guard prospect.

McCray is a skilled guard prospect with a nice handle of the basketball, and an ability to score the basketball amidst defensive pressure. McCray's herky-jerky offensive style makes him very difficult to defend, as he utilizes changes of speed and direction to keep his defenders off balance. He also has wonderful body control when he gets into the lane. Combined with an excellent overall feel for the game, McCray is a problem with the basketball in his hands. A left hander, making it difficult to defend him. He is a good passer but needs to continue to develop in his ability to run a team. A good on the ball defender.

A large, wide-body post prospect that is a strong rebounder on both ends of the floor and uses his body to gain good inside post position. A good finisher. Solid low-post footwork. Has good hands. OK shooter but still raw offensively away from the basket. Runs the floor hard. Solid low post defender. Capable shotblocker. Needs some work but has good overall potential if he will improve his work ethic.

Mayberry is a solid guard prospect that is fundamentally sound and does not turn the basketball over. Handles defensive pressure extremely well. Excellent ball handler and passer. Sees the floor very well and makes players around him better. Pushes the basketball up the floor. Good finisher in traffic, and able to create off the dribble for himself and others. OK shooter. Very good defender with excellent lateral quickness. Solid all-around guard prospect.