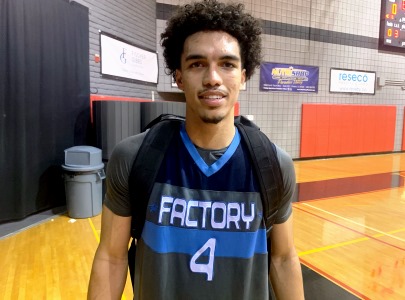 With the spring evaluation period now coming to an end across the country, and as college programs have now turned their attention towards younger prospects, there are still some top-rated members of the 2019 Class still on the recruiting board. Here are my top available prospects still on board for the summer for college coaches to still take a very hard look at (in no particular order) - four-year colleges and junior colleges . . .

Williams is very impressive in his ability to play the game of basketball and make plays for himself and others.  Williams is a larger guard prospect that likes to have the basketball in his hands and make plays for himself and others.  Williams is capable of playing the point guard position with excellent size at 6-foot-4 and an excellent, college-ready body.  This young man has a strong ability to make plays off the dribble for himself and others.  He has a strong handle of the basketball and is able to handle defensive pressure, while making players around him better - a valuable asset.  There aren't very many guard prospects with his combination of size, strength and skill level.  A solid shooter, although he needs to be more consistent in his shooting stroke, but he is streaky.  Has an excellent mid-range game.  A very good post-up player and finisher.  Gets to the free-throw line quite often.  Pushes the basketball up the floor and sees the floor well.  A good on-the-ball defender.  A very good sleeper prospect.

An athletic and skilled wing prospect with an excellent motor and a knack for scoring the basketball.  Very good in the open floor where he is an excellent finisher.  A good shooter with range, but at his best shooting from the standstill position from three, and scoring of off the dribble.  A good mid-range player as well.  A good ball handler for his size.  A solid passer.  An active rebounder.  A good defender with good lateral quickness, and capable of defending several positions.  A very good sleeper prospect with very good potential for the future.

A native of Milwaukee, Wisconsin.  A tough and gritty defender that has also has a good overall skill level and ability to make plays.  A good shooter from mid-range, and has a solid perimeter shooting stroke from longer ranges, and he is capable of making several shots in a row when he catches fire.  A good rebounder for his size and plays athletic.  A very good on–the-ball defender that is capable of becoming a lock-down defender over time.  A very good slasher and finisher and is a good overall scorer in the open floor.  A good ball handler that is capable of playing several positions on the floor with good overall versatility.  An OK passer.  His toughness as a player makes him a very intriguing prospect.

Mains missed his entire senior season due to a surgery he had, which was very unfortunate.  He is a very skilled and sharp-shooting guard prospect that still has a lot of upside as a player, and has the potential to become an excellent basketball player over time.  A fundamentally sound prospect with an ability to stretch the defense from almost anywhere on the floor.  He has a nice ability to catch-and-shoot the basketball with unlimited range.  He is a good ball handler and passer, and has very good versatility as a player - capable of playing several positions on the floor.  A good defender that plays passing lanes and also plays with excellent energy on the court.  An active rebounder that competes on both ends of the floor.  He will need to continue to focus defensively and on rebounding though over time to maximize his potential as a player.  An excellent shooting guard prospect with excellent potential for the future.

Marin is a talented and skilled guard prospect with a nice overall smoothness to his game.  He is an excellent shooter of the basketball that extends the defense. He is also able to make plays for himself and others off the dribble.  He has added some very good size to his frame as of late, and is an attractive looking prospect. Had an excellent spring performance for himself, where he played at a very high level. Has very good upside as a college prospect.  A very good looking sleeper prospect.

Talley is a skilled wing prospect with an ability to play inside and out and score the basketball from the perimeter.  He is able to score effectively around the paint, and also has a nice ability to step outside and shoot the basketball as well with a good shooting stroke.  He has very good versatility as a player - allowing him to play multiple positions on the floor, although he is at his best currently as a small forward or wing.  Talley has a good handle of the basketball, so he is capable of playing in the open floor, but his best asset is his physical toughness and ability to rebound and finish around the basket.  He has a very good mid-range game, which allows him to score effectively around the paint and from the perimeter.  Talley is quicker than most power forwards on the perimeter, and he has the size to overpower most smaller players - taking them into the post as needed.  Has overcome a lot to become a serious college prospect once again.  Had a high scoring game of 33 points this year against Findlay Prep (NV). Suffered a knee injury this spring that should force him toward juco.

Artis is a nice talent that has overcome several injuries throughout his high school career, and returned to have a very good overall high school career.  If not injured, this young man would have ben regarded as one of the top overall prospects in the class.  A skilled wing prospect with a nice overall skillset.  Has a good perimeter shooting stroke with range, and is able to make plays for himself and others off the dribble, where he is a good finisher in the lane against bigeer defenders.  Good in the open floor, and a good slasher.  An active rebounder with good size for the wing position.  A good passer that sees the floor and is willing to make plays for others.  A good sleeper prospect with a bright future ahead.  Has a great smile and attitudfe, on and off the court.  Son of former Arizona star football and basketball player Carlos Artis.

Strover is a skilled guard prospect with a slick handle and an ability to slash and finish.  He is very good in the open floor, and is a good finisher.  Strover is very thin physically, but has a very athletic frame with nice upside.  A solid shooter that needs to become more consistent from longer ranges.  A solid passer.  Good ball handler – capable of playing both guard positions.  A   very good defender that is capable of becoming a lock-down defender over time.  Has very good potential as a player.

Rashaan is a solid senior guard prospect that is a very good athlete at the guard position who also has the ability to make plays for himself and his teammates. Has the ability to finish at the rim, knock down a floater or mid-range pull up and is a capable three point shooter as well. He is also a very scrappy defender who gives other guards problems. He showed the ability to make others better as well, and get them open looks off of his play making ability. He is a very intriguing prospect that will only get better.

Jones is a high-scoring guard prospect with a nice motor and athleticism.  The son of former University of Indiana standout Jay Edwards, Jones is a sure-fire top-prospect for the future.  A good ball handler and passer, but is at his best when scoring the basketball.  A combo-guard prospect.  Has very good lateral quickness, and could become a lock-down defender over time.  Pushes the basketball up the floor.  A good finisher in traffic.  Creates his own shot and also sees the floor.  A good sleeper guard prospect.