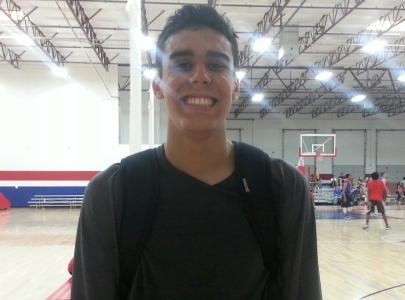 With the summer evaluation period upon us this July, the 2016 class of prospects will take center stage with college programs across the country, as they become the highest priority for college coaches.  Here are our some more of the hottest prospects in the state that college coaches will be keeping a close eye on this summer . . .

Stall is one of the elite bigs in a center-laden 2016 class in Arizona. Stall is a typical back-to-the-basket center, as he uses his great, long frame and solid low-post footwork to score around, thru, and over defenders.  One of the best assets of Stall’s game is his offensive/ defensive rebounding abilities.  He is always in the right place at the right time, and outworks others to get his hand on the basketball.  Stall is an alert passer, as he can see when double-teams are coming, and he will spray out to an open shooter, or dish off to an open cutter.  On the defensive side, Stall’s girth and long wingspan alone detour offensive players from coming into the lane, and he also is an able shot-blocker as he alters or blocks many of the shots that are put up around him.  Stall currently holds offers from Eastern Washington, Portland State, San Jose State, North Dakota, UC Santa Barbara, Northern Arizona University and Fresno State.

Gardner is one of the top wing players in all of Arizona and especially in the 2016 class.  At 6-7, Gardner is a very good shooter in offensive sets, as well as in transition.  He is very capable of getting his own shot off of the dribble from a variety of places on the court - from 3-point distance or mid-range.  Gardner also uses his long strides and quick first-step to get by and around defenders, and get to the basket.  Gardner is a very exceptional athlete and many of his transition plays result in him dunking or drawing a foul, and then converting at the free-throw line.  On the defensive end, Gardner uses his long wing-span to make read blocks on offensive players in the lane, as well as strip offensive players clean, as they dribble up the court or come by him in the lane.  Gardner is a very intriguing prospect and will have a monster senior season. He holds offers from Central Arkansas, Air Force, Liberty and Columbia at this point in time.

Thomas has burst onto the AAU scene this spring, and has established himself as one of Arizona’s hottest names in the 2016 class.  With the frame of a receiver, Thomas knows how to use his body to his advantage on the offensive and defensive sides of the basketball.  Thomas is at his best when he uses his high-level motor in transition to spot up for the open 3, or slash to the basket and convert or draw a foul.  Thomas is a consistent 3-point shooter, but is much better when he is driving the ball to the hoop.  Thomas also has very quick feet on the defensive end, and, again, uses his football-like frame to keep defenders from going where they want to go.  Thomas holds offers from Grand Canyon University and Cal State Fullerton.

Ondigo could have the most upside out of any prospect in Arizona’s 2016 class.  Ondigo is a very raw center whose overall offensive and defensive game seems to get better every time he plays.  He has a very solid post game on the block, and converts at a very high rate once he gets position.  His jump-hook is the best move he has, and defenders have an issue stopping it due to his pure length.  Ondigo also has a very quick bounce off of the ground and it does not take him much time to gather/dunk, once he has the ball in his hands. Ondigo is always alert on the defensive end, and alters/ blocks many shots that come near him.  He currently holds offers from UTEP and Cal Poly, with many more on the way after the summer evaluation period.

Lowell is a long and skilled wing prospect with a superb shooting stroke – making him an attractive looking prospect.  The cousin and also very similar as a player to former BYU forward Stephen Rogers. A talented performer with upside as a player.  Shoots a high percentage from the field, and is able to score inside and out. Still needs to develop as a low post player, since he enjoys the perimeter, but he is definitely skilled enough and big enough to create match-up problems for most opposing forwards.  A solid rebounder.  A good ball handler and passer.  OK defender.

This spring has been Whitaker's best performance of his young career, as he has proved that he is more than just potential for the future.  Whitaker has played with a purpose as of late - something I have not seen from him often.  He has shot the basketball very well from three-point distance and also has showed an improved mid-range game.  He also now makes better decisions with the basketball, and looks to get his teammates involved.  Whitaker has shown good leadership for his team and wants to win each game.  If he can continue this trend - watch out.  He has the length, athleticism, sheer potential and upside to become a serious prospect over time.  Raised his recruiting stock as much as any player this spring.  Will look to gain much more recruiting attention this summer, and is definitely a big-time sleeper prospect in the class.

Henderson is the glue of the most successful high school basketball program in recent history here in Arizona - Corona Del Sol.  An early commit to Portland State, Henderson has played 3-years of varsity basketball and has learned under some of the best former point guards that the state of Arizona has had to offer.  Henderson is always confident and calm on the court, and knows what to do in nearly every situation.  Henderson can consistently knock down shots from beyond the 3-point line with a smooth, quick release. He is quick off of the dribble and can convert thru and around defenders, using a variety of moves once he is in the lane.  He is also very active on the defensive side of the ball, using his feet and solid frame to keep offensive players from setting up the offense or getting by him to the basket.  Henderson should have a very solid 4-year career at Portland State University, and I am excited to see how he becomes the senior leader for his Corona Del Sol team next season.