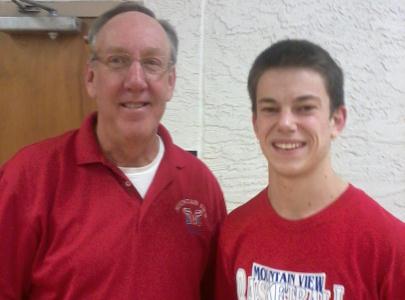 After watching 30 different high school freshmen teams, I just wanted to rank my favorite teams that I have seen.

I started on November 27th at Marcos de Niza and ended at North Canyon on February 1st.  I averaged about 3 games per/week - making it out to watch 30 different teams.  Some of these teams I saw two times.  This ranking does not reflect star freshmen in the program, like the great Shadow Mountain HS kids all on varsity.  This ranking includes only the true freshman teams.  Some of these players also play junior varsity, but their main “playing time” is on the Freshman team.

Here are my Top 10 Freshman teams in the state that I observed this high school season ...

1. Mountain View HS - This team only had 2 losses with a starting frontcourt of 6-foot-6 John Trendler, 6-foot-4 Tava Ta’ase and 6-foot-3 Zane Jowaiszas.  They have a very balanced team, led by 6-foot-1 PG Gresyn Rogers and 6-foot SG Jayton Brown.

2. MESA HS - The team was led by a strong starting five with 6-foot SG David Cummard (Lee Cummard’s (BYU) nephew), 6-foot-3 PF Darius Goudeau and 5-foot-11 SG Drew Hatch leading the way on most nights.  All 5 starters had minutes on the JV team as well.

4. Desert Vista HS - Easily the fastest team I have seen.  Have 4 or 5 quick guards who can just play, led by 5-foot-8 PG Cameron Centers and 5-foot-6 PG Johnny Johnson.  They are the “Chavez team” for freshman ball.  Might not be a superstar on the roster, but Coach Josh Jolin subs in atleast 10 players or more on some nights for an extremely deep team.

8. Horizon HS - One of the surprise teams that has a big team upfront, led by 6-foot-4 Jordan Powell and 6-foot-3 Josh Larsen. The team also has an elite scorer in 5-foot-11 SG Joey Cipolletti.

9. Hamilton HS - A solid, all-around team with no superstar, but extremely well coached by Justin Hastings.

10. Perry HS - Another solid team, led by 5-foot-8 PG Kyle Van Haren who puts his team in position to succeed.