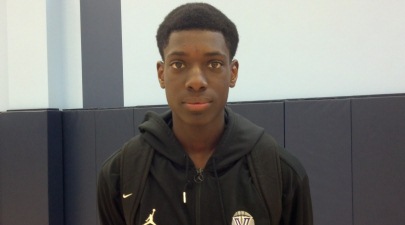 A serious and big-time sleeper prospect, Edogi has not been seen by most college programs, but lately the ultra-athletic unsigned senior prospect is beginning to blow up with college programs.

After a very strong performance in last weekend's Southwest Showcase Main Event,  in which Edogi showcased his superb athleticism and ability play above the rim, Edogi has seen his recruiting interest begin to soar.

On Thursday evening, Edogi received his first scholarship offer from the University of Hartford - mid-major division-I program on the East Coast.  Edogi is now considering taking an official visit to the program later this month.

This week, Edogi also heard from Washington State, Western Kentucky and Texas San Antonio.  Many more scho0ls will also look to get involved this month as the viewing period opens up later this month.

Edogi advised me that he is open to any college program at this point and is very excited about the opportunity to play at the next level.  Edogi works hard daily on his game and is developing his skills to play on the wing at the collegiate level, while also being able to play inside as a stretch-four as well.

Edogi is in no rush to make a decision, but is looking forward to competing this spring on the club circuit, in which he plans to generate even more college recruitment over the two evaluation weekends in April (April 20-22nd & April 27-29th).

Edogi also achieved a passing test score on his SAT examination recently, and is now a full qualifier academically.

Arizona Hoop Review Scouting Report:  Edogi is a high-wire, high-energy athletic talent that competes hard and attacks the rim with vigor.  He has explosive athleticism for his size and plays well above the rim - an excellent finisher.  One of the best dunkers in Arizona's 2012 class.  Also a very effective rebounder on both ends of the floor, Edogi rebounds the basketball at it's apex in the air and rebounds outside of his area very well.  Very active.  He has good low post moves and good footwork, with a nice jump hook.  he does not mind physical contact and gets to the free-throw line quite often.  He is more of a mid-range shooter at this point in his young career, as he likes to score around the basket.  He will need to improve his range on his shot and become more consistent from behind the arc at the next level, but can be very effective, depending on the level he lands at collegiately.  He runs the floor exceptionally well and with great energy - creating easy scoring opportunities for hismelf on the offensive end of the floor.  He is also a good defender overall, and has much more success as a low post defender.  Will need to improve his focus in this area at the collegiate level to guard wings consistently, but he definitely has the lateral quickness and the athleticism to do so.  A very good looking sleeper prospect for any mid-major division-I program.