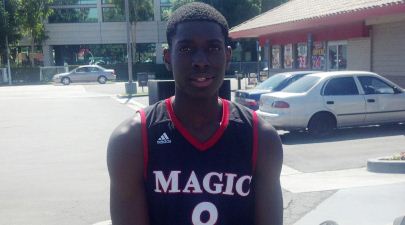 Currently a post-grad prospect, Edogi has developed a great deal over the past year while playing against local junior college competition at Westwind, and under the leadership and direction of head coach Gabe Stephens.

Edogi had numerous games this season against junior college opposition, where he com peted at a high level and put up strong individual statistics - helping the Westwind post-grad program to their best season since the school's origination.

As a senior post at Valley Vista HS during the 2011-2012 high school basketball season, Edogi was among the most talented athletic talents in the class.  While seeing double-teams and very rarely seeing the basketball, Edogi’s high motor and explosive athleticism allowed for him to make plays and still be very productive.  As a result, Edogi had a strong high school season for himself and began to garner serious recruiting attention after the season came to an end.

Edogi received scholarship offers from such schools as Hartford University and Rider University, while also receiving strong interest from such schools as Cal-State Fullerton, Prairie View A&M, UC-Riverside and Sacramento State while in high school.  Currently, Edogi has received much of his interest from Nevada, Cal-State Bakersfield, Western Michigan and Western Kentucky, but much more interest looks to be headed his way very soon, as there are very few available post players with his combination of size and athleticism.

A definite sleeper prospect, Edogi has still not been seen by many college programs, and in a state as underrecruited as Arizona is, this young man has flown well below the recruiting radar for some time.

Edogi advised me that he is open to any college program at this point and is very excited about the opportunity to play at the next level.  He is in no rush to make a decision, but plans to compete on the spring club circuit to raise his recruitment.

Edogi advised me that he is already an academic qualifier and is ready to go.

Arizona Hoop Review Scouting Report:  Edogi is a high-wire, high-energy athletic talent that competes hard and attacks the rim with vigor.  He has explosive athleticism for his size and plays well above the rim – an excellent finisher.  One of the best dunkers in Arizona’s 2012 class.  Also a good rebounder on both ends of the floor, Edogi rebounds the basketball at it’s apex in the air and rebounds outside of his area very well.  He has solid low post moves and solid footwork, with a nice jump hook.  He does not mind physical contact and gets to the free-throw line quite often.  He is more of a mid-range shooter at this point in his young career, as he likes to score around the basket.  He will need to improve his range on his shot and become more consistent from behind the arc at the next level, but can be very effective, depending on the level he lands at collegiately.  He runs the floor exceptionally well and with great energy – creating easy scoring opportunities for himself on the offensive end of the floor.  He is a solid defender overall, and has much more success as a low post defender.  Needs to continue to focus on this area of his game to maximize his full potential, but he definitely has the lateral quickness and the athleticism to do so.  A very good looking sleeper prospect for any mid-major division-I program.