Thompkins Will Wait Until The Spring 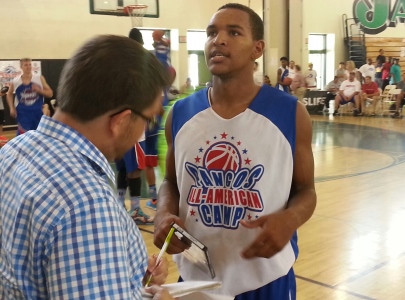 One of the elite prospects in the state of Arizona is Sunnyslope High School's talented and high-scoring point guard prospect Sammy Thompkins.  After an extremely impressive spring and summer performance for himself, Thompkins generated loads of college attention and scholarship offers.  After mulling over his current recruiting options, Thompkins has decided to forgo the fall evaluation period, and move to signing during the late signing period.

It had looked as though Thompkins would verbal to Rice University after assistant coach, and former Arizona State University staff member, Scott Pera worked hard to land the talented guard.  After Pera looked to get a commitment from Thompkins, Thompkins chose to wait until the spring to make his college decision.  Rice instead landed another guard prospect.

Thompkins is coming off an excellent club season, while leading his club program to numerous strong finishes.  In the process he led his club team to an upset win over the nation's #1 team, the New Jersey Playaz (2014 Nike Peach Jam Champions).

He also ranked as the tournament's second leading scorer at the prestigious invite-only Pangos All-American Camp, which brought together many of the top prospects in the country for a weekend battle in front of numerous college scouts and media.  In the event, Thompkins emerged as a high-major quality guard, and one of the elite guard prospects in the West.  Thompkins would explode in this year’s event – averaging 19+ points per/game in the camp.  Thompkins would get selected among the Top 60 campers in the event and earning an all-star invitation as a result of his efforts.

Look for Thompkins to be the state's hottest unsigned prospect in the spring, and land a big scholarship offer.  Arizona Preps will continue to follow the college recruitment of Thompkins very closely and bring you any updates as they develop.