Thompkins Will Decide Between 2 New Schools 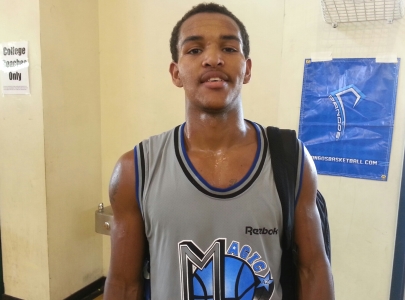 It has beena very long and wild recruiting process for top-rated 6-foot-3 senior combo-guard Sammy Barnes-Thompkins, who has had to change his mind numerous times regarding his commitment to a college program.  After first verbally committing to St. John's University this spring, Thompkins decided to re-open his college recruitment.

After recently re-opening his college recruitment, Thompkins' phone has been ringing off the hook.  Since Thompkins changed his mind, college programs have been in hot pursuit of Thompkins.

Thompkins had planned to visit Kansas State, USC and Nevada., but then had a change of plans and took an official recruiting visit to Saint Mary's College this weekend.

Today, Thompkins decided that he will now also take an official recruiting visit to Boston College this week.

Thompkins advised me that he plans to make a decision between the two schools, but that he really enjoyed his visit to Saint Mary's.

Look for a decision for Thompkins very soon.  Thompkins is a full NCAA academic qualifier.

Arizona Hoop Review Scouting Report:  Already possessing a college-ready body at such a young age, Thompkins’ physical size, strength and shooting stroke are glaring attributes for him as such a young prospect.  He is also capable of playing both guard positions on the floor, which makes him a versatile prospect and valuable to his team. A big-time scorer but also proved last spring and sumemr that he can also run a team effectively, and rises to the level of his competition.  A potential lock-down defender at the next level.  Among the better guard prospects in the West and recently de-committed from St. John’s University.