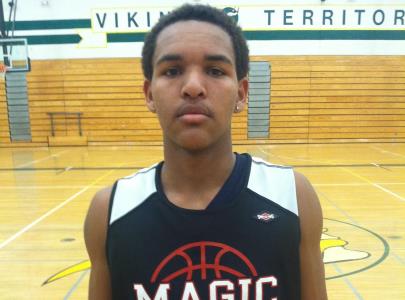 Sunnyslope High School's recent transfer, 6-foot-3, 185-pound junior combo-guard prospect Sammy Thompkins is coming off a strong sophomore season and an even stronger performance this spring and summer on the club circuit.  As a result, Thompkins is now beginning to generate serious recruiting interest for himself among many college programs across the country.

This week, Thompkins received his first official scholarship offer and it is a nice one for the talented guard prospect.

While watching Thompkins work out this week at his high school program, San Jose State University assistant coach Jack Kennedy attended the workout and came away impressed with Thompkins' ability enough to offer him a scholarship.

Thompkins advised Arizona Preps that he was very excited about the offer and that he is very interested in the Spartans' basketball program.  Former Tempe HS graduate (2011) and Pepperdine University guard transfer Jordan Baker currently attends San Jose State after transferring schools this summer.

Thompkins is coming an excellent sophomore season, as he ranked among the top individual performers in the state as a mere sophomore – averaging 20.7 points, 7.1 rebounds, 2.4 assists and 2.2 steals per/game.

This young man is among the top individual overall prospects in Arizona’s 2015 class, and is the son of former college standout Gary Thompkins, who played at Iowa State.

Thompkins came up big last season and should only continue to improve over another two high school seasons of play, especially under the leadership of the Sunnyslope coaching staff, which is among the best in the state at teaching the fundamentals of the game of basketball.

Already possessing a college-ready body at such a young age, Thompkins’ physical size, strength and shooting stroke are glaring attributes for him as such a young prospect.  He is also capable of playing both guard positions on the floor, which makes him a versatile prospect and valuable to his team.

Sunnyslope High School is coming off an excellent season in 2012-2013, as the team finished with a very impressive 28-4 overall record on the season.  Led by their head coach Ray Portela and his committed basketball staff, the Vikings would advance to the Division-II state semi-finals before falling to eventual state champion, Paradise Valley HS.

Sunnyslope’s future looks extremely bright with the addition of Thompkins and the return of rapidly developing star post prospect, 6-foot-10 senior post Michael Humphrey.  The combination of Humphrey and Thompkins next season should be one to watch, as these two prospects look to lead the Vikings to next year’s Division-II state championship.