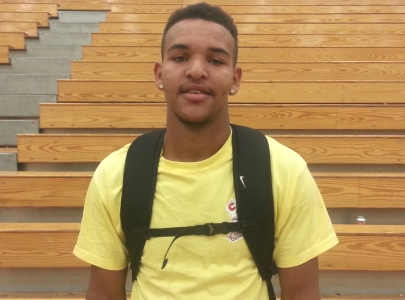 Many basketball enthusiasts in the state considered former Sunnyslope High School 6-foot-3 senior guard Sammy Barnes-Thompkins as the state's best individual player early in the high school season, as he torched his opponents with numerous scoring outbursts.  But Thompkins' career would take a winding twist early in the season, when he was released from the Vikings' basketball team by head coach Ray Portela.  As a result, Thompkins has had to pick up his basketball career with Planet Athlete Academy this season, a local prep school in the valley.  And the move has not slowed down Thompkins one bit in his college recruiting.

While things did not work out for Thompkins on the Sunnyslope basketball team this season, he uis still currently attneding classes at Sunnyslope and is on pace to graduate in the spring.  Thompkins, however, is competing for a loaded Planet Athlete program coached by Eric Bowman.  Thompkins is receiving loads of Division-I interest as of late, with numerous high-major programs now looking to get involved.

Thompkins will look to make his decision this spring and plans to take several visits before reaching a decision.

While everything looks to be working out for Thompkins and his future, Thompkins' father, Gary Thompkins is still very upset with the way things took place for his son with the Sunnyslope basketball program.  Gary Thompkins is a well respected basketball coach and former college player - playing his college career at Iowa State at the same time as current Phoenix Sun's head coach Jeff Hornacek.

"Why would you kick a kid off when he (Ray Portela) knew our history of traveling from state to state," said Gary Thompkins.

Thompkins went on to say, "We made many sacrifices to come to Sunnyslope in the first place.  We picked him to help to get Sammy ready for the next level.  We selected him over 15 other phoenix coaches.  Why would he take our family through all that, and then tried to say that he is sorry to Sammy.  Sorry for what.  He is like a father to some kids.  You don't give up on kids.  He did."

Barnes-Thompkins was off to an excellent start on the season for Sunnyslope, and was fresh off a 40-point performance in a recent narrow, double-overtime loss to a very athletic Cesar Chavez team.  In the 81-78 double-overtime loss, Barnes-Thompkins would sit out the game’s first half, but then would score, what must be a state scoring record of 40 points, in the game’s second half.

Thompkins was also coming off an excellent club season (spring/summer), while leading his club program to numerous strong finishes.  In the process he led his club team to an upset win over the nation’s #1 team, the New Jersey Playaz (2014 Nike Peach Jam Champions).

After an impressive spring and summer performance for himself, Thompkins generated loads of college attention and scholarship offers.  After mulling over his current recruiting options, Thompkins decided to forgo the fall evaluation period, and move to signing during the late signing period.

Thompkins should become one of the hottest recruiting targets in the West this spring, as more college programs look to improve their backcourts for next season.  We will continue to follow the recruitment of Thompkins closely, and bring you any recruiting updates as they continue to develop.