Thomas, Bowling Prove Their Worth 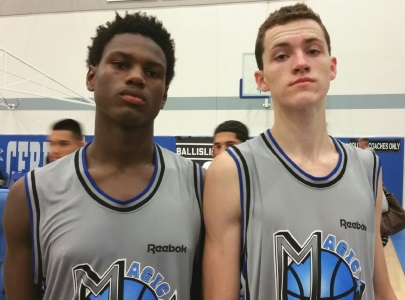 This weekend was a big one for club teammates, Elijah Thomas and Chris Bowling.  While soaring under the recruiting radar during the spring, both prospects would benefit themselves nicely in Los Angeles this weekend while leading their club program, the Arizona Magic Elite, to a 17U tournament championship at the Pangos Summer Sweet 16 event.

No prospect in the event raised more eyebrows than Sunrise Mountain HS talented 6-foot-6 rising senior wing Elijah Thomas this weekend, as he absolutely blew up in this event.  Thomas had coaches at all levels intrigued by his raw talent and versatility.  This event was a true coming-out-party for Thomas, as many college coaches and media marveled at his abilities to handle the basketball and make the right plays for his team.  His college-ready body also intrigued coaches as he is also barely 16 years of age.

Thomas looks to now become one of the hottest sleeper prospects in the West, and earned an offer from Long Beach State on Sunday from head coach Dan Monson and his staff.  Many more scholarship offers look to now be on the horizon for this superb young talent.

Gilbert High School's 6-foot-7 rising senior wing Chris Bowling needed a terrific performance to boost his college recruitment, and it couldn't have come at a better time for Bowling and his family as his mother cried on the court after his courageous performance.  Bowling showed a sweet shooting stroke and terrific athleticism  in his team's championship win on Sunday.  Bowling has been playing his best basketball of his young career, and will now gain serious college recruitment as a result - which level will be interesting.

Bowling should begin to hear from numerous college coaches after his gutty demonstration on Sunday afternoon.

While Bowling is very thin, he gets a lot done and is very skilled.  Over time Bowling could be the steal of the class once he develops physically.  Bowling showed an excellent shooting stroke with unlimited range and also proved unique athleticism.  He also competed hard for rebounds and loose balls.  Bowling is on a mission this July and he now looks to be another one of the hottest sleeper prospects in the West.

This talented duo has officially emerged in the minds of college coaches and both could receive high-major college recruitment as a result.  It will be very interesting to see how their recruitment develops, and it will be a very important recruiting process to ensure that both prospects make the right decisions in the end.