Third Time Is A Charm For Central Over Chavez 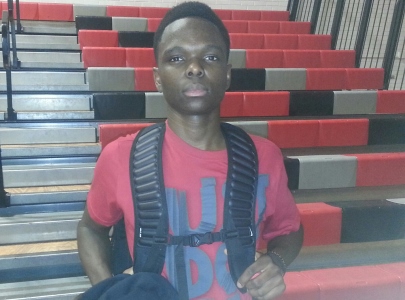 The third time this season was a charm for Central High School (25-5) against a talented and athletic Cesar Chavez (26-4) team.  After losing twice to Chavez this season, Central would get a late inspired effort to defeat Chavez 61-55 in the second round of this year's Division-I state playoffs.

In front of a very nice crowd, which included members of the coaching staffs from several different local junior college programs in the state, Central and Chavez would look to present a very athletic contest, as both teams feature many gifted prospects.  With excitement filling the room before the game, the game would get off to a slow start but would heat up late for both teams.

Both teams would struggle from the field in the first period, but Central would take a small advantage at the end of the period, 17 to 14, after a late three-pointer and a transition layup from 5-foot-10 senior guard Donavin Rusk.

The second period would prove much of the same play, as both teams would go into the half tied at 27 all, after a fade-away, bank-shot three-pointer from Chavez senior guard Tarion May.

At the end of the third period, Central would get a a nice burst from 6-foot-6 senior forward Famoun Miller.  Miller who struggled much of the night from the free-throw line, would turn up late in the game for his team - taking over the game when he needed to.  After two free-throws from Miller, a driving basket inside by him, a nice transition layup by Rusk, two more free-throws by 5-foot-11 senior guard Obi Megwa (pictured) and then another driving layup from Miller just before the buzzer - Central would take a comfortable 43-33 lead into the fourth period.

But Chavez would not lay down.  Chavez 6-foot sophomore guard Donald Carter would steal the basketball and convert a layup with 2:45 left to play to get Chavez within 6 points, 54-48.  Then with a minute left to play, 6-foot-6 senior post Isaiah Wilson would complete the play of the high school season.  Wilson would steal the basketball from Famoun Miller, then travel up the floor - dunking the basketball with aggression with his left hand over Miller on the break after being fouled on the play.  While it was the most emphatic dunk and play we have seen all season long, it would not be enough, as Central would hold on to win the ball game - 61 to 55 over Chavez.

Chavez had won 21 games in a row on the season at one-point, but would lose 2 of their last 3 games on the season when it counted.

Central will now move on to the Division-I state quarterfinals, where they will meet up with three-time defending state champion, Corona Del Sol.  Central recently led Corona for much of the game, before losing to the Aztecs, 66-63, so next week's match-up will be a very exciting contest that you will not want to miss.