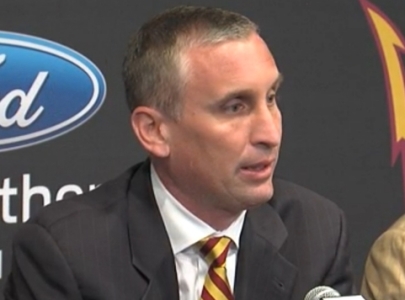 The state of Arizona has never been known for the sport of basketball and Arizona State University has not done much over the past 30 years to change that fact.

The University of Arizona has always had a big-time head coach in place - one that could relate and communicate to the fans and boosters, and also one that was well respected nationally.  Arizona State, on the other hand, has struggled to hire or land a head coach that could compete with the Wildcats' leader.

Well, things look to be significantly on the upswing for Arizona State basketball fans with the recent hiring of former college basketball superstar guard and hard-working, fearless head coach Bob Hurley.  Recently the program announced that Hurley would take over the basketball program in surprising fashion, and it is a new day, as a result.  Finally, Sun Devils' fans will have a leader for their basketball program that will not settle for mediocrity - a college coach that will work tirelessly to compete with the Wildcats' basketball program south of the I-10 freeway, rather than be considered a joke in comparison.

Consistely each year, Arizona State has tried to create a rivalry  in basketball with the University of Arizona, and while the Sun Devils have occassionally defeated the Wildcats in head-to-head competition, no one really has taken Arizona State seriously after a win.  Often times, Arizona State would enter the match-up with a record just barely above .500, while the Wildcats would be ranked among the top 10 programs nationally at that time.  Whether ASU would win or not, it wouldn't make much difference as the Wildcats would still waltz into the NCAA tournament soon after, to the enjoyment of U of A fans.  ASU fans would have to hold on to a mere win over the Wildcats, because the NCAA tournament, more times than not, would not be an option.

Look, you get the point.  As a graduate of Arizona State and as an alum, I have always wanted to see the Sun Devils as a consistent contender.  Especially when you consider that they have a goldmine in Tempe.  Many college coaches before Hurley have struggled in being able to recruit to the Sun Devil's campus.  Are you kidding me?  You can't get young men to want to go to Arizona State in sunny weather, on a large campus filled with more beautiful girls than any other school in the country and with a culture that features parties and drinking, and oh yeah, that also has a place called Mill Avenue just down the street?  Get outta here.  Do you think it is easier to recruit to Tucson, Arizona, or some of the other campuses in the PAC-12?  No way!

We just needed a coach with vision and a plan to get it done.  I believe Hurley is that leader we have been looking for.  First of all, he has a big enough name and reputation to stand next to Sean Miller, Arizona's fearless leader, and hold some weight.  Hurley, also an East Coast product, like Miller, and also a "city kid," from the streets of New York.  Hurley is tough inside and out, and will not accept no for an answer.  Hurley has a "get it done" mentality.

When the hire of Hurley was announced, I was very skeptical initally, because I was not sure how effective he would be in recruiting the West.  After thinking it over - it doesn't matter.  Hurley will get it done with West Coast prospects, if possible, and if not, then he will be able to recruit the best prospects in the East.  As a result of Hurley's heavy ties with basketball eficianados on the East Coast, and his tremendous support through lifetime relationships, Hurley will have a nice balance, I believe, of West Coast and East Coast basketball prospects.

Kids want to come Arizona State and live in this oasis.  They want to build a basketball program where there hasn't been one.  They want to be the first to do something great with a high-major division-I program, that has amazing resources that have never been utilized.  We just have not had the right person in the position to ask.

Wait until Bob Hurley is sitting in the living room and tells you about his basketball legacy, his stint in the NBA, his tremendous coaching tradition in the Hurley family, led by Bob Hurley Sr. - one of the greatest basketball minds of the 21st century.  Wait until Bob Hurley tells you about his coaching philosophy, and how he plans to take Arizona State to the NCAA Tournament, and then to the Final Four one day - with toughness and a desire to be the best and not settling for anything less.

Bob Hurley is the right man for the job - the guy to take Arizona State basketball ahead and in the right direction.  He was affordable for the Arizona State program and made complete sense.  For a very fair price, Arizona State fans are getting a young head coach with a terrific name, a huge basketball family tradition and a hard-working and tough city kid that doesn't like to lose.

No need to break this down much more.  Bob Hurley is taking over an Arizona State program at the right time - just in time to hit the road for the NCAA evaluation period and start recruiting.  I look forward to seeing Hurley in the stands of games, alongside other high-major coaches, while big-time national prospects take the floor.  Atleast, now I know that Hurley will have as a good a chance of landing one of these mega star prospects as any other high-major head coach.  In fact, Hurley's chances, for the first time in Arizona State history, may be even better than other coaches chances.  Go figure.  Can you imagine?  Now finally seeing the name, Arizona State, on the recruiting lists of high-major, Top 50 national prospects?  I, for one, am really looking forward to seeing that!

It is just a matter of time for Hurley.  Welcome Arizona State basketball fans to the new era of Bob Hurley.