The Best Available, Lliya Still On The Board 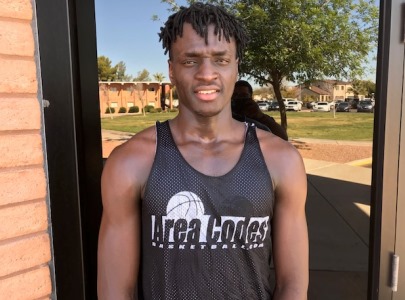 While college programs have turned their full attention towards the 2021 and 2022 recruiting classes for prospects, one prospect from the 2020 Class still remains unsigned, and is worthy of serious recruiting attention late. Paradise Honors High School's 6-foot-6, 200-pound ultra-athletic wing Jerry Lliya is the best unsigned Arizona prospect still on the recruiting board from the 2020 Class, and he is considering all of his options still for the fall.

It was thought that Lliya had made his decision to go to Chipola Junior College (FL) as of late, but Lliya is still considering his options for the future. While he does have another junior college program that he currently likes, and wants to keep it close to his vest, Lliya would like to play at a division-I program next season, if possible. If not, he has decided that he will head the juco route in an attempt to boost his college recruitment, and he will, as Lliya is a tremendous athlete with excellent size, physical strength and an extreme motor - fully prepared to make an immediate impact wherever he lands.

A native of Nigeria, Lliya has been well traveled throughout his young career. Lliya first came to the state as a sophomore at a former prep school, CGM Prep, but when the school was shut down, Lliya moved to Paradise Honors HS, where he spent the last two high school seasons. As a senior, Lliya led the program to a 22-6 overall record in the state's 3A Division, before the team fell to Sabino HS in the 3A State Playoffs (56-53). Lliya averaged 12.5 points, 8.7 rebounds, 1.3 steals and 1.6 blocks per/contest last season.

What people do not know is that Lliya has been playing with cataracts in both eyes for some time. Last season, as a senior, Lliya had the cataracts removed from both eyes, during the high school season - causing his extreme discomfort and made it difficult for him to be at his best. He had surgery during the high school season to remove the cataracts from both eyes - one eye in November and the other eye in January. Lliya is now fully recovered from both surgery's and ready to make a splash in his future.

Lliya is an ultra-athletic wing prospect with an ability to play well above the rim in a half-court set while slashing to the basket, or in the open floor where he thrives.  He attempts to dunk everything, every chance he gets and is a human highlight reel in the open floor.  While his overall offensive skills still need work (ball handling), his size and bounce off the floor are very unique.  He needs to improve his overall ball handling to become more effective in the open floor at providing backcourt depth for his team, and also to help him create off the dribble for himself and his teammates. Lliya has an inconsistent shooting stroke still from longer ranges, so he is at his best while slashing to the basket or from mid-range.  He is an excellent offensive rebounder after put-backs or dunks off missed shots. These are all things that Lliya can improve over time, no problem, but will help him maximize his potential as a player and take him to another level. You can teach the skillset, but what he has you can't teach.

Lliya's best attribute is his excellent motor.  He has a motor that doesn't stop and continues to run at a high rate for long periods of time on the floor, and never seems to slow down, which allows him to make plays consistently on the court.  He has the potential to become a very good defender, as a result of such energy and work ethic, and with continued focus, he could become a lock-down defender over time.  A definite potential high level two-way player that plays passing lanes.

Wherever Lliya finally lands in the near future, it will be very fun to watch him develop and see what he ultimately does in the future for himself.