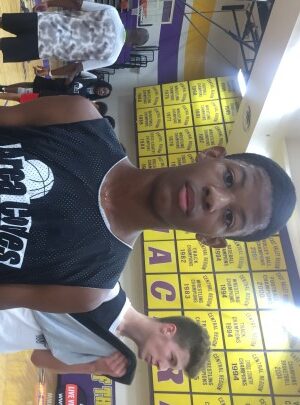 Corona Del Sol (6-2) is not the same dominant Aztec program that we have been accustomed to seeing over the years, as the program is very young, but they do have a lot of young talent and are on the rise for the future.  Led by the superb, versatile play of 6-foot-4 sophomore guard Dalen Terry, this year's team is off to a solid start to the season.

On Thursday evening, Terry and the Aztecs would travel to the West Valley for a match-up with Copper Canyon High School.  Copper Canyon (3-4), under the tremendous leadership of long-time head coach Paul Murphy and his staff, are looking to build something for the future as well.  Led by the strong play of talented 6-foot-4 junior guard Isaiah Marin, Copper Canyon would look to slow down a talented Corona team on Thursday evening.

Copper Canyon would look to be up for the test early, as they would build a quick 11-4 lead, after a strong left-handed driving layup from junior guard Bvron Wvcoff.  Corona though would come right back behind the play of Terry, who would consistently find open teammates.  After a layup in the open floor from Terry, Corona would narrow the lead, 11-10, with 2:51 left to play in the first period.   Corona would take a 14-13 lead after the first period.

After the half, Corona would come out focused and looking to put Copper Canyon away on their home floor.  With 5:42 left in the third period, Corona take huge momentum in the game after a nice transition layup by Terry.  After another score by the Aztecs, Copper Canyon would be forced to call a timeout - going down 41-25 to Corona.

With 1:34 left to play in the third period, Corona would build their advantage to 17-points after another three-point play inside the lane from 6-foot sophomore guard Eric Blackwell.

Corona would take a 48-29 lead after three quarters, and would not look back from there.  Dalen Terry would check out of the game with 3:14 left to play in the fourth period, as Corona would then cruise to a big 67-42 victory on the road.

Corona will next host Highland HS on Monday (12/11) and then travel to Basha on Tuesday (12/12), before next weekend's Desert Challenge @ Rancho Solano Prep.

Recruiting Notes:  UCLA assistant coach David Grace was in attendance on Thursday to watch Corona's 6-foot-4 sophomore guard Dalen Terry.  Terry is quickly developing into one of the better young guards in the West, and has an excellent feel for the game and enjoys making players around him better.  Very rarely do you see a young man with such an advanced feel and a strong ability to get his teammates involved in the flow of the game.  He has excellent potential for the future . . .

Copper Canyon 6-foot-4 junior guard Isaiah Marin is a nice talent and really has caught my attention each time I have seen him play.  He has an advanced overall skillset with a superb shooting stroke and a strong handle of the basketball.  He can get his shot off anytime he wants and is a very good playmaker as well with excellent versatility - capable of playing several positions on the floor, including the point position.  A definite and strong sleeper prospect for Arizona's 2019 class.