Terry Commitment Another Big One For The Wildcats 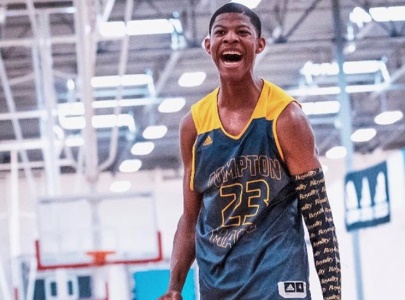 The University of Arizona is back in a major way after a tremendous 2019 Class of signings. What's exciting for Wildcats' fans is that Head Coach Sean Miller and his staff have not slowed down one bit either, as The U of A has continued this strong trend now for the 2020 Class - receiving another big commitment last week from one of the nation's premier guard prospects, Hillcrest Prep's top-25 nationally ranked 6-foot-6, 160-pound senior Dalen Terry.

For many years, the University of Arizona has been widely recognized and known for landing the nation's top basketball talent. After a very short period where the Wildcats saw a few of their top signed prospects move to different college programs, while some accusations flooded the basketball program, the program has now returned back to form in their ability to land the nation's best basketball prospects. After a tremendous 2019 Class of signings, which included top-rated national prospects Nico Mannion and Josh Green, both McDonald's All-Americans, the Wildcats have began to follow up with another strong class of signings for the 2020 Class with the recent commitment of Hillcrest's Dalen Terry.

Terry has received loads of national attention over the past couple years, and has become one of the more sought after recruiting targets around the country - playing for one of the top club programs in America, the Compton Magic (CA), where he teamed up with the nation's #1 overall prospect, 7-foot senior post Evan Mobley (USC commit), a sure-fire NBA lottery pick. While playing for the Magic organization, Terry was highly regarded and continuing to pick up recruiting steam, before his huge commitment last week to the Wildcats.

The recent commitment by Terry will allow for the Wildcats to continue their dominant recruiting trend in the 2020 Class, as Terry is a pass-first point guard with excellent size and court vision, and a great personality. His excellent personality and vocal play, on and off the floor, should only help the Wildcats attract more elite prospects to the program in the class, and future classes.

What was special in the recruitment of Terry for the Wildcats, was that the gifted prospect already had a long list of college programs on his list of offers before the Wildcats got involved with him. The Wildcats recently offered Terry in May, while he turned in a strong performance at the NBPA Players Camp on the campus of the University of Virginia. The offer from the University of Arizona proved to be enough for Terry to change his recruiting direction, after already holding offers from Florida, Arkansas, Marquette, Memphis, Arizona State, Cal, USC, Utah, UNLV, Nevada and Grand Canyon University, and with many more offers looming.

Arizona Hoop Review Scouting Report:  Terry is a long, rangy prospect with huge upside and a bright future ahead of him.  He has excellent length of body which allows him to make plays, and an advanced feel for the game from the point guard position.  While possessing very good height for the point guard position, Terry is a true-point guard with a pass-first mentality.  He is fundamentally sound and has a nice overall skillset and feel for the game.  A bigger point guard prospect that loves to have the basketball in his hands and make plays for himself and others off the dribble.  An excellent passer of the basketball that sees the floor very well, and pushes the ball up the floor to the open man.  He has a solid shooting stroke with range.  Has excellent overall versatility as a player.  Very good in the open floor.  An active defender.  Plays passing lanes.  Runs the floor well.  Has serious upside and potential for the future, with a high basketball IQ.  A budding prospect with a very bright future.