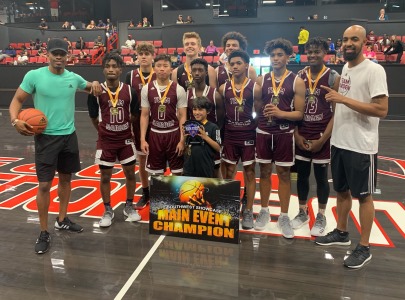 The Southwest Showcase Main Event took place this weekend on the campus of numerous different locations around the state.  Organized by Tournament Director Ron Coleman, this annual event kicks off the spring club season every year and is an amazing event to cover annually, as this event is the one that club teams around the state utilize to create bragging rights for the club season.  This weekend's event was the biggest event ever as the event was compised of more than 200 teams this weekend.

With many of the state's top club programs in LA this weekend, this weekend's event was missing many top teams from the 17U and 16U Divisions.  With many teams still in action this weekend, Arizona Preps was on hand in full force this weekend to bring you the top performers from the weekend.

This weekend, led by the play of a prospect from California, 6-foot-4 sophomore guard Clarence Martin, the Team Harden 16U team would win it all - winning the 16U Gold Tournament Championship.  The team was very talented, although they were missing a couple rospects from the team this weekend.  The team also was led by the play of Perry High School's 6-foot-7 sophomore post Duke Brennan. Brennan is a nice post talent with very good size and broad shoulders for the post position.  He is very active on both ends of the floor and is strong on the offensive glass.  He is also an active shotblocker with broad shoulders and a developing body that is still growing a great deal.  He runs the floor hard and came up with a big blocked shot late in thechampionship game, which helped lead the team to a championship.

The team also received strong play from rapidly developing 6-foot-7 sophomore forward Darian Masi.  Masi played very strong physically on the glass, and finished strong around the basket.  He is a very intriguing prospect with excellent size and broad shoulders.  He runs the floor very hard and competes on both ends of the floor.  Masi is a nice looking prospect and should have a very good spring and summer for himself.

6-foot junior guard Unisa Turay is a very quick and deceptive guard prospect with nice range on his shot and a quick release.  He is also a very good penetrator and finisher in the lane, and pushes the basketball up the floor and makes plays for himself and others.  Turay is also an excellent defender and is coming off helping lead his high school program to a state title.  A winner.

Congratulations to the Team Harden 16U team on this weekend's tournament championship, and good luck to their players and coaches this spring and summer.