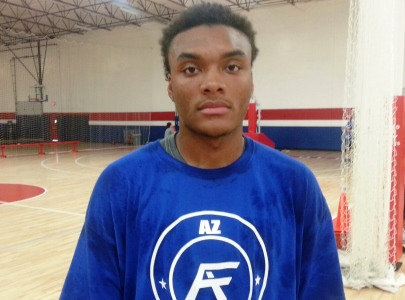 With the emergence and rise of the Team Bibby club basketball program in the state of Arizona, the level of basketball in the state has simply been raised to another level.  Sporting young kids of all ages on the boys and girls side, former NBA star guard Mike Bibby and his family and friends have developed some of the state's premier basketball talent.

Last weekend, while participating in this year's Double Pump Spring Hoop Fest, Team Bibby, as they are known, would take home the tournament championship for the 16U and 15U Divisions of the tournament - a very impressive feat for one program from Arizona.  Former Arizona Magic Director of Operations Jeff De Laveaga did the same thing with the Arizona Magic organization consistently thoughout his tenure with the program.  Team Bibby looks to be primed to do the same thing with their club program.

While I was unable to catch much of the action in the 15U Division, for the 16U Division Team Bibby was led by two top-rated 2016 prospects from Shadow Mountain High School - 6-foot-4 sophomore do-it-all forward Carlos Johnson and 6-foot-4 ultra-athletic sophomore wing J.J. Rhymes.  Team Bibby would be without young star guard Mike Biby Jr. in the event, but in his absence Johnson and Rhymes would carry their team to a championship victory.

Johnson would play in his usual manner throughout the tournament, bullying over defenders with his size, strength and superior athleticism.  Johnson, who plays with a very high motor, seemed to do whatever he wanted on the floor against defenders that looked to be at his mercy - whether inside the post or on the perimeter.  Johnson showed a good perimeter jump shot, although he was able to get wherever he wanted to off the dribble.  Many college coaches were in attendance for the Team Bibby games, and Johnson raised some eyebrows with his play.

J.J. Rhymes is as athletic a talent as there is in the state and has a serious motor, which allows him to make plays at a high rate.  Rhymes was also unstoppable in each of his team's games, as he scored whenever he wanted to on the floor.  If Rhymes missed a shot, he simply followed it up with a tenacious enthusiasm and finished plays regularly over defenders.  This young man has a nice left-handed shooting stroke, and while he is still not overly consistent from longer ranges, his ability to make shots from mid-range and while driving to the basket make him very difficult to defend.

As I have said consistently, this group of prospects from Shadow Mountain HS and Team Bibby will dominate the state of Arizona for the next two years.  While the 2016 class in the state of Arizona is absolutely loaded with talent, the Team Bibby 16U group is filled with many of the top prospects from the class.  The 2017 class is also well represented by the Team Bibby 15U team, as these kids are also very talented.

There is one consistent theme with the Team Bibby program, other than the fact that Mike Bibby's name is on their jerseys.  The kids in this program are tough - flat out.  As a result, they play extremely hard on both ends of the floor and compete at a high level.  Whatever they give up in skill, they make up for it in effort.  This sheer fact allows them to win, and win at a high rate.