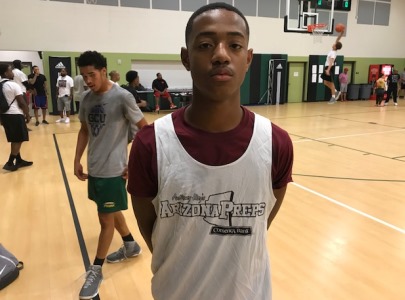 Arizona's 2020 Class of prospects is absolutely loaded with talented prospects for the future, and looks to be the best class the state has seen since the 2014 Class.  One prospect in the class that has shot up the rankings over the last year has been Buckeye High School's 6-foot-1, 160-pound junior guard Tay Boothman.  After emerging at last year's Arizona Preps Fall Showcase event with a superb performance, the last year has been a terrific one for Boothman, as he has been on an absolute tear.

Boothman was once an unknown prospect, but after torching the competition in last year's Fall Showcase event, Boothman continued to have a terrific sophomore season for Buckeye HS - helping lead the team to a strong 24-5 overall record last season and a late run in the 4A state playoffs, before falling to Salpointe Catholic in overtime.

Boothman would flat out turn up his performance during the NCAA spring evaluation period, while helping lead a loaded group of 2020 prospects for the Powerhouse Hoops club program.  He would also help lead Buckeye to this summer's championship at the Arizona State Team Camp, as Boothman would help to lead his program to several big wins in the camp, including a big win over Hillcrest Prep.  He would then return to Powerhouse Hoops to help his 16U team have another impressive run during the summer.

For his efforts, Boothman would raise his recruiting stock a great deal.  Over the past year, Boothman has gone from an almost unknown prospect to a heralded guard prospect that is recognized as one of the best pure shooters of the basketball in the West.  He now has several scholarship offers on the table for himself as well, and still has a full year remaining on the club circuit to impress many more college programs.

Currently, Boothman has offers from Denver, Central Arkansas and Houston Baptist.  He has not indicated any leaders at this point in his college recruitment, but he is sitting in a nice situation heading into a junior season that should be a major one for him and his Buckeye teammates.

Boothman is a terrific shooter of the basketball with absolute unlimited range on his shot.  He has a quick release of the basketball, and can get his shot off quite nicely amidst defenders.  He is also a crafty guard prospect with a very nice feel for the game, and is able to play both guard positions on the floor.  He plays with a very high level of confidence against high-level competition, and has absolutely no fear whatsoever on the basketball court - a terrific attribute for himself.

Boothman will be a nice guard prospect for any college program that ultimately lands him over time, but it will be enjoyable to watch him over the next two high school seasons, as he looks to lead his Buckeye program to a 4A state title, which will have to go through state power - Shadow Mountain HS.  Boothman has the mentality I love, as he and his Buckeye teammates are looking for another opportunity this high school season to avenge their loss to Shadow Mountain, after last seasons defeat to the Matadors.

I will continue to follow the college recruitment of Boothman closely, but also continue to watch him as a player, as he positions Buckeye for another terrific high school season.

Arizona Hoop Review Scouting Report:  Bootheman is a young combo-guard prospect with a very nice offensive skillset that allows him to make plays for himself and others at a high rate. He is an excellent shooter of the basketball with unlimited range, and has a very pure shooting stroke that allows him to make shots consistently, even with defenders draped all over him.  Bootheman is much more of a scorer at this point in his young career, but he is capable of playing both guard positons on the floor. He is at his best though when shooting the basketball, so he will need to develop in his ability to become a playmaker over time over time. But what he does well, he does very well - shoot the basketball and score the basketball off the dribble.  He is a very good finisher in the lane and is able to make plays in traffic, over bigger defenders with a variety of floaters. He is a good ball handler and passer as well, but really focuses on scoring the basketball, so that may determine his level of college over time.  Defensively, Bootheman has very good athleticism and lateral quickness, which allows him to play passing lanes. He has quick hands and feet and is able to stay in front of his man - a very good one-one-defender.  A solid overall college prospect that is fundamentally sound as a player.