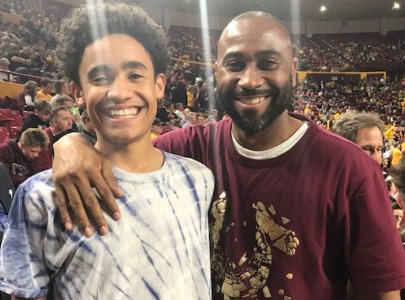 "I was told after my freshman year in high school that I was good enough to play varsity, but I was just too small.  I was just 5-4," said James.  "My coach told me that I have to do is grow.  So my thing was I was going to work by butt off during the summer and get a lot better, and force him (coach) to have to put me on varsity this time.  So that's what I did, not knowing I would grow to 5-11 over the summer."

After his terrific high school playing career, James would spend two seasons at Phoenix College, before moving on to finish his high school basketball playing career at Concordia College (CA), where he was among the top overall performers in the conference.  James would complete his Bachelor's Degree at Concordia, before also finishing his Master's Degree in Special Education Mild to Moderate Disabilities from the University of Phoenix in 2001.

James would then move on to have a professional playing career for himself, where he played in Greece for five years, before retiring from the sport and returning home to his former high school and deciding to take over the basketball program at Cortez High School in 2000.

As the head coach at Cortez HS, James was very successful in a school that had very little residential growth in the area where the school resided.  With very little size on his teams, and while playing a very up-tempo style of play, James compiled a 177-120 career coaching record in an amazing 18 seasons as the school's head coach.  James guided the Colts to back-to-back semifinal appearances in 2008 and 2009, and to a Division-III State Runner-up finish in 2014.  In 2015 the Colts won their first Division Championship in 26 years.  James was also selected as the state's Coach of the Year (3) different times while at Cortez.

Today, James is the head assistant coach for SAGU University (American Indian College), and is slated to take over the head coaching position for the program in the future.  The basketball program at SAGU is a member of the NAIA D-II level, and has provided another opportunity for Arizona's basketball prospects.

Tarik and his wife Melissa James have a son Jalen (pictured left) and a daughter named Jordyn.  His son Jalen James is a member of Arizona's 2020 class, and is one of the top up-and-coming young prospects in the state.  Attending Deer Valley HS as a sophomore currently, Jalen James is very skilled with a pure shooting stroke and a quick release and unlimited range on his shot.  His best asset currently is shooting the basketball, which he has no problem getting it off and with a consistent shooting stroke.  James lacks true physicality at this point in his young career, but he makes up for it in his skillset.  James can get his shot off almost at will, and has a nice of enough handle of the basketball that allows him to create shots for himself and others as needed.   He has a bright future ahead of him.

Tarik James played in an era where, like many others before him and in his era, did not have scouts or media that helped to create recruiting opportunities for him.  Instead, James soared below the recruiting radar, for the most part, and if he had played in today's era of social media and internet-based recruiting, James would have played at a much higher level and would have also had a much longer professional career.

Today, after developing many student-athletes at Cortez, and also as a college coach, James also has done a lot to develop many of today's top student-athletes, as he trains many players in the Northwest Valley.  James also developed a nice club program in the Northwest Valley known as The Classics, based on the classic style of play taught by the coaches of the program.  The program was very successful and, this spring and summer, will play on the club circuit as a member of the Powerhouse Hoops' program.

"My whole entire career, whether it be playing or coaching, has always been 'if you just had this or that,' " said James.  "I had to learn and teach myself that why would I care about what I don't have?  Make do with what I have and just be the best Tarik can."

Tarik went on to say, that his favorite quote that always fueled him was, "You find out what kind of person you are with how you handle adversity."