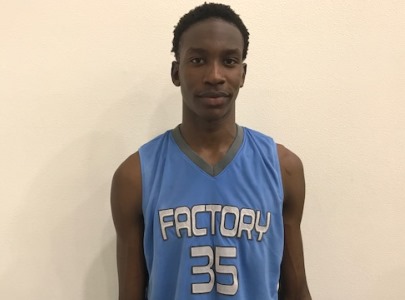 One of the top prospects in Arizona's talented 2019 class is Apollo High School's 6-foot-6, 160-pound long and rangy sophomore forward Emmanuel Taban.  Taban emerged last club season as a talented and budding young prospect for the future, and, this club season, he has come into his own as a college prospect.

This summer, while playing for his club program, The Factory, Taban has had to handle the basketball full-time in the backcourt, due to the absence of club teammate, D'Maurian Williams.  Williams suffered a severe ankle injury before the summer began, and, as a result, Taban has seen much time at the point position for his club team.  As a long, lengthy guard prospect, Taban has looked very attractive and has shown excellent versatility.

Recently, while he and his teammates traveled to the state of Texas to take part in the Great American Shootout (GASO), Taban received two scholarship offers from Southern Utah and Portland State.  These are the young man's first two scholarship offers of their kind, but I definitely expect more offers to pour in over time.

Last season as a sophomore for Apollo HS, Taban played excellent minutes for an Apollo HS team that had a strong season and fell just short of a 5A state championship.  The team finished with an excellent season, and a 26-4 overall record on the season.  Taban averaged 5.9 points and 4.1 rebounds per/game last season in his second season of varsity level basketball.  I expect him to raise these averages considerably this season, after coming off a very good showing this spring and summer.

Taban and his team will take part this week in the Fab 48 event in Las Vegas.  I will be keeping a very close eye on Taban, as he continues to raise attention and develops into a serious recruiting target for many division-I programs.

Arizona Hoop Review Scouting Report:  Taban is one prospect that I have identified in the state of Arizona that college coaches will soon be identifying as a nice college prospect for them to take a hard look at.  This young man has tremendous potential for the future, as he has exceptional upside as a basketball prospect.  Possessing a long but very thin frame physically, Taban is the kind of young prospect scouts and media enjoy seeing - long wing prospect with very good overall versatility and a slashing mindset.  While an athletic wing performer with a nice ability to slash and finish plays, and a pure shooting stroke with range, Taban is an attractive prospect, although he needs to gain some serious size to his very thin frame. Taban's best offensive asset is his ability to shoot the basketball with range.  He is also able to slash and score in the lane or in the open floor, where he thrives and enjoys getting out on the break.  His ability to make plays in the open floor and when slashing to the basket are valuable qualities as a player - attributes that will make him a very attractive recruiting target over time.  He is a solid defender that uses his length and athleticism to defend passing lanes and get steals, while also being able to deflect passes.  He is also a very good shotblocker as a result of his length and timing as a shotblocker - something that makes him a very attractive prospect over time.  He has excellent versatility as a player, and should be able to play several positions on the floor over time as he matures physically.