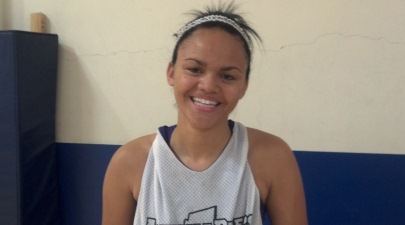 The spring will be a very busy period for both high school boys and girls basketball prospects in the state of Arizona, as many of the state's top prospects are still available and unsigned.

Mullings put up very good numbers this high school season, while leading her Cobras to a 22-10 overall record in the state's Division-II Class.  She would also help lead Cactus to the second round of the Division-II state playoffs, before a loss to #7 seed Palo Verde HS (58-53).

While one of the state's most versatile prospects, Mullins remains uncommitted this spring and will look to play through the spring in an attempt to open some eyes from college coaches.

Mullings is as versatile a guard prospect as there is in the state's 2012 class.  Standing almost 6-feet in heigth, she is capable of playing several positions on the floor - point guard, shooting guard or as a small forward.  She is a legitimate guard prospect,  capable of playing both guard spots on the floor - a very nice asset for her size.  She is a very good ballhandler and passer with very good overall skillsets for the collegel level.  Even at her size, Mullings likes to push the basketball up the floor and also moves very well without the basketball.

Mullings is also very athletic and has very good lateral quickness.  She plays athletic also - a nice feature.  Her athleticism allows her to defend several positions on the floor.  She is a solid finisher around the basket and also has a nice mid-range game.  Mullings is a good shooter of the basketball with range also.  As she continues to develop her shooting stroke, she will be able to maximize her full potential offensively.

"There aren't many point guards around with her size," said Arizona Venom coach and club President Carolyn Jones.  "She is super-talented, has speed and court awareness."

Mullins also has 4 other sisters in her very large family.  Her older sister, Megan Mullings, currently plays for Sacramento State.

Arizona Preps will continue to follow Mullings' recruitment closely this spring, and bring you any updates as they develop.