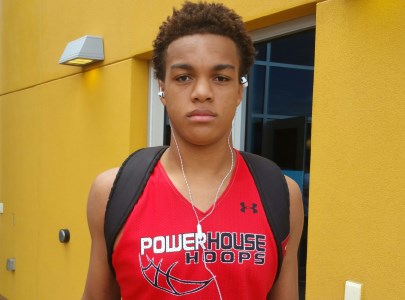 The Arizona Preps staff had a very busy weekend covering several events held in Phoenix.  On Sunday we observed many of the games held at this year's Southwest Exposure Showcase, organized by long-time successful tournament organizer Ron Coleman.  Coleman always puts on large quality events for his participants, and this event featured many top-rated teams from inside the state, and also abroad.

I had an opportunity to watch numerous top performers from this year's event, and was intrigued by some players and teams from the weekend.  Here are my observations from this weekend's event . . .

Chandler HS 6-foot-6 junior wing Tevian Jones continues to impress a great deal with his play, as he did it all this weekend - showcasing an excellent ability to handle the ball in the open floor and also a nice mid-range attack off the dribble.  He has really improved his perimeter skills and showed off a really nice shooting stroke with excellent range - something that will make him almost unguardable over time.  A big-time athlete, Jones has elite high-major athelticism and length.  Blowing up as of late, as many college coaches have been beating down his door this fall . . .

The Powerhouse Hoops 16U squad was absolutely loaded this weekend, and included many of the state's top prospects from the 2018 and 2019 classes.  The team featured such top-rated prospects as Salpointe Catholic 6-foot-5 sophomore Majok Deng, Shadow Mountain's 5-foot-10 sophomore Jovan Blackshear, Tucson Mountain View's freshman Evan Nelson, Red Mountain's 6-foot-6 sophomore Andre Harris (pictured), Chandler's sophomore Vean Simon and Desert Ridge's 6-foot-8 super frosh Jason Harris.  This team was special this weekend, although it was their first time playing together.  Each of these prospects are among the state's best, and if this group can stay together, look out . . .

Planet Athlete, a local prep and high school program, also had a very talented team in this year's event, which included a few very good sleeper prospects for college programs to look at this spring.  6-foot-8 senior forward Keith King, 7-foot senior post Trevor Irish and 6-foot-4 senior wing Josh Thomas are each very good prospects for mid-major programs looking for untapped prospects with excellent potential for the future.  King is a big-time talent and among the best sleeper prospects in the state; Irish has excellent size, skill level and upside for the future; Thomas has a nice body with excellent strength and also has very good versatility.  Three nice prospects to take a hard look at by head coach Eric Bowman . . .

Prescott HS 6-foot-6 sophomores Jackson Tillapaugh and Central HS 6-foot-5 sophomore forward Isaiah Thompson are two of the best prospects in the state's 2019 class.  A classs that is already loaded with talent in the state, these two prospects have what it takes to become serious recruiting targets over time.  Thompson has excellent size already and superior physical strength and energy.  Thompson competes on both ends of the floor and is a force inside the paint, while also possessing a soft shooting touch from the perimeter.  Tillapaugh is a nice find, as he has a nice overall offensive skillset that allows him to play inside and out.  He has very good footwork and is a mis-match for opposing teams.  He also plays with very good intensity.  Two very good mid-major division-I prospects for the future.