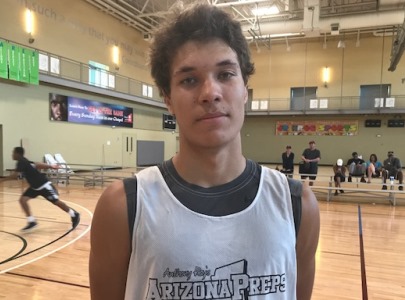 The Southwest All-American Camp took place recently on the campus of the Salvation Army's Kroc Center, and did not disappoint - creating an amazing atmosphere for some of the top prospects in the Southwest to showcase their skills in front of a nice crowd of scouts and media in attendance.

The event was absolutely loaded with talented prospects for the future and many lesser known prospects made a name for themselves at this year's event.  As a result of this year's event, each prospect had an opportunity to gain maximum exposure to college coaches through the many quality scouts and media that was in attendance for this year's event.

Here are some of the top sleeper prospects from this event that helped themselves the most, heading into this month's busy July evaluation period . . .

Townsell (pictured) was the best overall sleeper in this year's event, setting him up for a big July evaluation period for himself.  Gained loads of attention at this year's event from scouts/media.  A very strong and athletic wing prospect with a nice overall feel for the game, and excellent potential for the future.  A very good shooter with range on his shot, and also a nice mid-range game to go with it.  Can create scoring opportunities for himself off the dribble, and is an excellent finisher.  Very good in the open court.  Moves well without the basketball and can score without the ball in his hands.  An active rebounder.  A good overall defender.  Co-MVP of the event, and will see his recruitment blossom in July.  Has an offer currently from UC Davis.

Jackson is one of my favorite sleeper prospects in Arizona's 2018 class, and is a player that should get a lot of attention in July.  He has excellent length on his body and his rangy frame allows him to finish strong around the rim and make plays most cannot at his position.  He is a good shooter with range on his left-handed shooting stroke.  A good low post player and finisher around the paint.  Runs the floor very well.  Has a very good motor and gets a lot done.  As good a sleeper prospect as there was in the event.  Will move to Scottsdale this high school season and now play at Rancho Solano Prep.

Martin is a very skilled guard prospect that can plays several positions on the floor and has the best shooting stroke in Arizona's 2018 class.  He has excellent size for the guard position and can see over the defense, allowing him to make plays for himself and others.  Has unlimited range on his shot and has a nice overall feel for the game.  A fundamentally sound prospect.  A surprising good athlete that can finish plays above the rim.  A very good ball handler for his size and passer that sees the floor.  A solid team defender that needs to continue to develop as an on-the-ball defender.  A good rebounder.  Will have a big July.

One of the top overall sleeper prospects in this year's event. A skilled wing prospect with good size and length.  Has a good overall skill level.  Has a nice, athletic frame.  A solid shooter with range that needs to add  and consistency from longer ranges to maximize his play on the floor.  A good mid-range player.  Has solid low-post skills.  A strong and active rebounder.  A very good finisher.  Runs the floor well.  A native of Oregon, where he played his high school basketball, Quinlan is a sure-fire prospect that should gain a lot of attention from mid-major programs this high school season.

Anigwe is regarded as the top post player in Arizona's 2018 class.  While he is still a sleeper prospect, he has excellent potential as a college prospect.  He has excellent length of body and is still growing into his lengthy frame.  Needs to add much more physical size and strength to maximize his potential as a player/prospect.  Has solid low-post moves and is capable of facing up and making shots from the perimeter out to 18 feet.  An active rebounder and shotblocker.  A good finisher.  Runs the floor well.  Has excellent potential over time and is a good prospect for a mid-major program that can develop him.

Lee is a big-time athletic talent that is able to make plays for himself whenever he has the basketball in his hands.  Can score from anywhere on the floor.  As a result of his tremendous knack for scoring the basketball, he is at his best as a shooting guard, but has the potential to play as a point guard also. A good ball handler.  An OK passer.  A very good finisher in traffic and in the open floor.  A good shooter with range on his shot.  Very explosive.  A good on-the-ball defender that needs to focus more on this area of his game, as he can become a lock-down defender at the next level.  A really nice sleeper prospect.

Wood has really grown on me over the past year, and I really like this young man's potential for the future.  He has a long, rangy frame that has the make-up to add more physical size over time, which will benefit him a great deal.  He is very athletic and runs the floor like a guard.  An excellent finisher at the rim and he uses his length to make plays on both ends of the floor.  Can score inside and out, and has some range on his shot.  Has big upside as a player and will open up many eyes in July.  Has a high motor.  An active rebounder that rebounds outside of his area.  A very good shotblocker that keeps balls in play and can start the break.  Advances the ball to the guard and then fills the lane quite well.  Has serious potential for the future.

Payne has really developed over the past year and is becoming a Draymond Green-type performer - able to play either forward position and makes shots from the perimeter or around the low post.  Has a nice perimeter shooting stroke with range, and also very good low-post moves.  An active rebounder and shotblocker with an excellent motor.  A good ball handler for his size and is a good passer that sees the floor.  Runs the floor extremely well, like a guard - a nice physical asset.  Has great upside and looks to be developing nicely into a mid-major plus prospect.

Jones is an ultra-athletic guard prospect that plays well above the rim and finishes plays in highlight reel fashion.  Plays much bigger than his size suggests.  Continues to impress me each time I see him play, so he is trending in the right direction.  Competes at a high level and capable of scoring from anywhere on the floor.  An excellent slasher and finisher.  An active rebounder that rebounds outside of his area.  Does not need the basketball to score.  A solid shooter, but needs to add consistency beyond longer ranges.  A solid ball handler and passer.  An excellent defender.  A nice sleeper prospect for a low major program.

Aguek is a very intriguing prospect with excellent length of body and a lot of true-upside to his frame.  He is still growing a great deal physically and has excellent potential over time.  Likes to play on the perimeter, where he is still developing a great deal.  Can score inside and out, but is at his best now from around the basket, until he becomes more consistent from longer ranges on his shot.  An active defender and rebounder, that uses his lengthy frame to make plays.  A good shotblocker.  Runs the floor very well and is a good finisher.  Has an excellent motor.   A big-time sleeper with loads of potential for the future.  With continued hard work, he should develop nicely over the next 1 -2 years.