Sunnyslope’s Michael Humphrey On The Rise 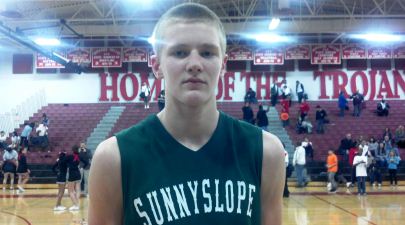 As we prepare to enter into the always highly anticipated spring and summer club basketball season, there will be many prospects taking center stage on the club circuit in an attempt to improve their college recruitment.  Many unsigned senior prospects and loads of underclassmen talent will be looking to gain the recruiting attention of college coaches, scouts and media throughout the spring evaluation period.

One prospect that will look to make a splash on the spring club circuit will be Sunnyslope High School's ultra-talented 6-foot-9 junior post Michael Humphrey.  Coming off a superb junior season where he helped lead his Vikings to an impressive 28-4 overall record on the season in the state's Division-II Class, Humphrey is ready to make a case among the state's elite level talents.

As a member of the state's very loaded 2014 junior class, Humphrey is one prospect that has flown well below the recruiting radar until now.  With the top 10 prospects in Arizona's 2014 class already receiving high-major division-I college recruitment, Humphrey is another prospect in the class that has now grown into becoming worthy of such consideration.

This past season, Humphrey, who also plays quarterback for his football team at Sunnyslope - an amazing fact, improved as much as any player in the state.  Humphrey averaged 11 points, 8 rebounds and 3 blocks per/game on the season, but came up huge down the playoff stretch for his Vikings and superb head coach Ray Portela.  Portela, who I played against during my high school days at Moon Valley HS, brings excellent toughness and preparation to his team as a head coach and has helped to develop the skillsets of Humphrey over the past 3 years.

No longer is Humphrey simply a long, skinny low-post talent with potential.  Humphrey has now developed into a long, athletic and very skilled low post talent that is capable of scoring from almost anywhere on the floor.  Humphrey has grown physically a full 3 inches over the past year of high school - an intriguing attribute which shows that he is still growing a great deal.  His fluidity as a player is most intriguing as he is able to make plays from the post or from the wing position, and out to three-point distance.  Humphrey possesses a sweet shooting stroke with a sift touch and also has nice footwork inside the painted area, where he also has a nice jump hook and gets off the floor quite easily.  Humphrey dunks the basketball with ease and is able to finish strong over defenders in the paint, an aspect of his game that will only continue to strengthen for him as he adds more size and strength to his thin frame.

Humphrey is one player that I will be keeping a close eye on this spring and summer, as he has the potential to become a very serious division-I prospect.  Numerous division-I programs are already beginning to show serious interest in him as a college prospect - something that will only develop a great deal over the next several months.

Look for Humphrey to develop a great deal over the next year, and if he can continue his rapid progress as a player, then look for him to make a serious rise in the rankings for the class - something that will not be easy to do in such a loaded class of prospects.