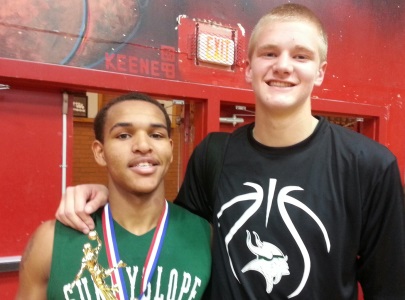 Sunnyslope High School (3-0) is making their first introduction this season into the Division-I Class in the state, and has immediately become a strong contender on the season to compete for a state championship.  Behind the strong play and star potential of 6-foot-10 senior post Michael Humphrey (Stanford signee) and 6-foot-3 junior combo-guard prospect Sammy Thompkins, the Vikings will have their best chance to win it all this season.

Sunnyslope breezed through their first two games in this year's Arrowhead Desert Classic pre-season tournament - knocking off Verrado High School and Thunderbird HS by an average of 30.1 points in the two wins.  On Friday evening, Sunnyslope would face a gritty Ironwood HS team on their home floor, in what would make for a very interesting contest.

Sunnyslope would come out on fire in the first period of the game - absolutely blowing out Ironwood on their home floor.  Sunnyslope would jump out to a huge 30-11 lead just after the end of the first quarter, and early in the second period.

Ironwood would make the game respectable late in the second period, but Sunnyslope would still comfortably take a 40-25 halftime lead into the third period.

Bottom line, with Humphrey and Thompkins on the floor, this game is no contest - without them on the floor, a tough and hardnosed Ironwood team would win the game.  Sunnyslope HS head coach Ray Portela would try his hand after Ironwood would make the game close late in the third period, 50-40 with 2:44 remaining.  Portela would insert Humphrey and Thompkins back into the Vikings' lineup.

Sunnyslope would then close out the game in the fourth period, even though Thompkins would foul out with 3:11 left to play in the game.  Sunnyslope would go on to win this year's Arrowhead Desert Classic tournament championship with a 69-58 victory over Ironwood.

Humphrey and Thomkins would both earn All-Tournament honors, while Michael Humphrey would be selected as the Tournament's Most Valuable Player.

This year's Sunnyslope team will be tough to beat this season if Humphrey and Thomkins can remain on the floor.  It will be a very good season for them and I look for this team to compete for it all this season.