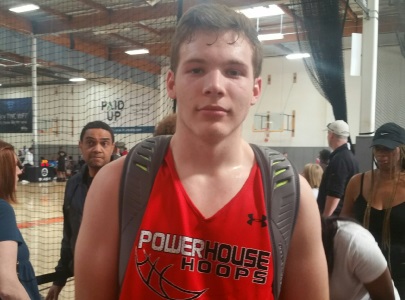 Someone's 0 had to go, as two of the state's top teams, both undefeated, came into Tuesday night's contest looking to make their claim as the top team in the 5A Division.  Host Chaparral (9-1) and visiting Sunnyslope (10-0) would make for the state's best match-up of the high school season in 5A, but it would get off to a very slow start, before eventually heating up in a major way.

The game's first half would belong to Chaparral and, of course, 6-foot-2 unsigned senior guard Colten Kresl.  Kresl has been on a rampage this high school season, ranking among the state's elite scoring leaders.  This game though would see Kresl explode in the game's first half.

In the second period, Kresl would continue his terrific play.  Another three-pointer by Kresl, where he would dribble around a defender and not hit the rim on his attempt, and Chaparral would jump out to a big 29-11 lead in the second period.

Chaparral would build a 35-18 lead at the half over Sunnyslope, behind 18 first half points from Kresl.

In the third period, a poised Sunnyslope team would return to the floor - looking to get back into this game, and they would quickly behind the versatile play of 6-foot-3 junior Kyle Fischer, the strong inside play of 6-foot-5, 205-pound junior post Chris Orozco (pictured) and the strong heady guard play of 6-foot junior guard Bryson Mewhinney.  After a strong post move inside by Fischer, and another mid-range post move by Fischer that would lead to a score, Sunnyslope would get to within 9-points of Chaparral, 41-32, with 3:45 left to play in the third period.

After another basket by Kresl, Bryson Mewhinney would convert a three-pointer and then another nice reverse layup around a defender to get to within 7-points, 44-37, with 1:40 left in the third.  Chaparral though would hold on to a 46-37 lead heading into the fourth period.

With 6:39 left to play in regulation, Chris Orozco would convert a three-point play inside the paint after being fouled.  After a mid-range jumper from Bryson Mewhinney around a defender, the Vikings would get to within four points of the Firebirds with 1:49 left to play, 53-49.  After a missed free-throw opportunity by Chaparral's 6-foot-7 senior post Kai Fletcher, Sunnyslope's 5-foot-10 sophomore guard Zach Paloma would tap in a missed shot attempt by a teammate to make it a two-point game, 55-53, with :46 seconds left to play in the fourth.

While looking to get a quick score by Chaparral, 6-foot-2 senior forward Corey Jones would get called for a travelling violation after a nice pass from Colton Kresl - returning the ball to Sunnyslope with :38 seconds remainning.  With :23 seconds left to play, Chris Orozco would score inside over a defender to tie the contest at 55 all.

Sunnyslope would then get the basketball back one last time with just 1.4 seconds left to play, but Kyle Fischer would barely miss a mid-range bank-shot at the buzzer - sending the game into overtime.

In the first overtime, and with Sunnyslope holding on to the game's momentum, Bryson Mewhinney would quickly put his team ahead, 59-57, after a nice driving layup.

Chaparral would take back the lead, 60-59, after a three-pointer from the corner by Jalen Foster, on an assist from Kresl.  Orozco and Kresl would keep their teams in the contest with baskets of their own, before another basket and a foul inside by Orozco.  After a missed free-throw from Orozco, 6-foot-2 senior guard JT Thoman would finally get into the act - scoring a driving basket to put Chaparral ahead, 64-63.  After another strong driving layup from Mewhinney, and 1 of 2 free-throws from Orozco, Sunnyslope would take a 66-64 lead with just seconds remainning, before Kresl would drive the length of the floor, only to dish the basketball to an open teammate, Kai Fletcher, for a basket in traffic at the buzzer - tieing the game and sending the game into a second overtime.

In the second overtime, both teams would get right back to business, as Orozco would score inside again, and then Kresl would knock down another three-pointer to tie the game with 1:20 left to play, 69 all.

Kyle Fischer would put Slope back ahead with a driving basket after being fouled, but he would miss the free-throw attempt.  After two free-throws from Orozco after being fouled in transition, Slope would take a four-point lead late, 73-69, but Kresl come right back again with another three-pointer of his own to make it a one-point game, 73-72.

After 1 of 2 free-throws from 6-foot junior guard Jaran Whitfield, after being fouled on the inbounds, Sunnyslope would hold on to a two-point margin, 74-72.  Kresl this time would take the ball into his own hands, looking to make another three-pointer over a defender, as he had all game, but this time, Kresl's attempt would just miss off the rim as the buzzer sounded, giving Sunnyslope the huge come-back-victory on the road.

Sunnyslope was led by a career high 28 points from Chris Orozco, 16 points from Kyle Fischer and 14 points from Bryson Mewhinney.

Colten Kresl would finish with another huge performance - scoring a game-high 38 points in the loss, while teammate Jalen Foster would contribute 18 points.

I have a feeling that we will see this match-up again late in the season, but next time in the 5A Division's state playoffs.  One of the best game's of the 2016-2017 high school season.