Sunnyslope Gets Off To Huge Start To Season 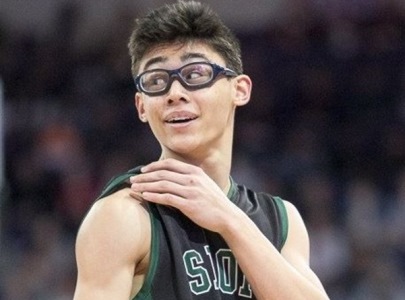 Sunnyslope High School (1-0) is back to start another season, after winning the last two 5A State Championships and appearing in the last three consecutive state championship games.  After so much success over the past three seasons, all of the usual suspects from the last three state title runs are each gone and have moved on to college.  This year's group will look a lot different this season, but after a big opening round victory Monday evening over an outmatched Sturgeon Composite High School (Canada) team in the first round of their Hoopsgiving Basketball Tournament, this year's team looks to be much like the Vikings' teams before them.

Each of the starters from the last three seasons have moved on, as Head Coach Ray Portela went young three years ago, and, as a result, it paid off and the team flourished for three-straight seasons - winning 2 of 3 5A state titles.  Now each of those experienced performers are gone, and the Vikings return one lone player that saw considerable minutes last season - 6-foot-1 senior point guard Zach Palomar (pictured).

Palomar gained considerable experience last season as a junior for Portela, in a backup role, and this season the ball will be in his hands full time.  Palomar is a very strong and athletic point guard prospect with a nice left-handed shooting stroke and an ability to get into the lane effectively and finish, or make plays for his teammates, which he does quite well.

In their first round match-up of their pre-season tournament on their home floor, this year's new look Vikings looked very much like the old Vikings, even better actually.  This year's team has a much better combination of size and length than the Sunnyslope teams in recent years, and also is loaded with talent at all positions on the floor.  The Vikings, behind the fast start and strong first half performance from Paloma would take an amazing 46-0 lead in the contest before Sturgeon would finally score on a free-throw.

In their 46-0 run, the Vikings were exactly like Vikings' teams before them, as they played tough defensively, were unselfish and patient on offense and took high percentage shots.  The difference in this year's team though is that they are much bigger than year's past, but still look to run on every opportunity.  They still score effectively in the half-court set and seem to have many more options with this year's team and are relatively deep.

Paloma, who looked terrific on Monday evening and actually finished a dunk in transition during his team's first half blowout, will make this year's team go.  6-foot-4 junior guard/forward Paul Hayden is one of the better skilled shooters in the state, and he is also very athletic with a strong frame.  Hayden will be among the program's top scorers this season.  6-foot-4 junior wing Xavier Lino is a nice athletic talent that provides excellent length defensively, and is a very good slasher and scorer in the open floor.  6-foot-3 senior guard/forward Ivan Palomar is also a very good shooter of the basketball. and will also provide leadership on both ends of the floor for a young team this season.

6-foot-9 sophomore post Carson Basham is a developing low-post talent that plays very big and is active in the paint.  Basham is raw offensively, but he will be a load for opposing teams this high school season, as he rebounds well and blocks shots - keeping balls in play and starting the Vikings' fast-break.

6-foot-7 sophomore forward Grady Lewis is the team's best college prospect and he has really developed quickly over the past year.  Still growing a great deal, Lewis is a long and athletic combo-forward with loads of potential for the future.  He runs the floor hard and well and he is a very versatile prospect that will see all of his team this season in the post, but should be able to play both forward spots over time as he matures.

5-foot-8 junior point guard Adrian Moore will back up Zach Palomar this season, and provide depth in the Vikings' backcourt this season.  He is a defensive guard with good poise and a knack for pushing the basketball up the floor.

This year's Sunnyslope team looks to be much like teams before it, and I am confident that it is a result of the quality leadership of Head Coach Ray Portela and his hard-working staff, which includes legendary former Sunnyslope head coach Dan Mannix.

Looks to be like much of the same for the Vikings this season.  I am not saying that they will win their 3rd-straight state title yet, but they will definitely be very tough to beat.