Sunnyslope Gets Big Win Over Gilbert On The Road 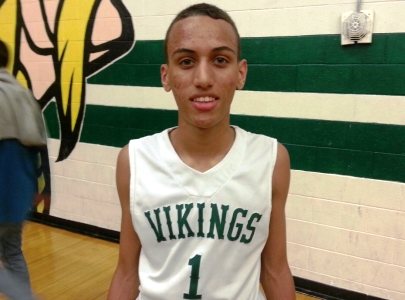 Sunnyslope (5-1) head coach Ray Portela has developed into one of the elite coaches in the state now, and he would have his team ready to take on a Gilbert group that was led by the superb play of 6-foot-6 senior wing Chris Bowling.  With (4) different scholarship offers on the table for himself, including a recent offer from Northern Arizona University, Bowling is looking to wait until the spring signing period to make his college decision.

Bowling would come up big for his team in this one, as both teams would compete hard in the first half, and for the entire game.  A mid-range jumper by Bowling late in the first half would give his team a 34-28 lead with 2 minutes left to play in the third period.

Sunnyslope HS 6-foot sophomore point guard Bryson "Pee-Wee" MeWhinney is quickly developing into one of the state's top 2018 guard prospects.  MeWhinney (pictured) is very skilled and elusive off the dribble with an exceptional handle of the basketball.  His mid-range jumper just before the end to the third period would pull Sunnyslope to within one point of Gilbert, 34-33.

In the fourth period MeWhinney would continue his strong play - finishing a strong drive to the basket around a defender with 6:20 left to play.  But Bowling would come right back for Gilbert, after an offensive rebound and put-back to keep Gilbert ahead 39-37.

Sunnyslope though would make a nice run when it counted, as they would take a 45-43 lead with 1:48 left to play, after a three-pointer from the corner from 6-foot-1 senior guard Hank Hibbeler.

After several key turnovers by Gilbert late in the game, Sunnyslope would capitalize.  MeWhinney would convert another strong driving layup around two defenders, that was similar to NBA guard Stephen Curry (Golden State Warriors).

Bowling would keep his team in the game late with several big three-pointers, but after two free-throws with :13 seconds left to play by MeWhinney, Sunnyslope would walk away with the nice 54-49 victory.

Sunnyslope will now look to improve their record on Tuesday (12/8) evening as they face Desert Mountain on the road next.