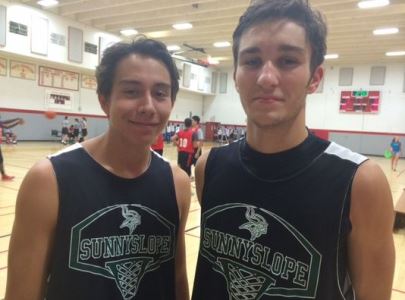 Sunnyslope High School (21-4) has been on an absolute tear this high school season, and has been one of the state's best and most surprising teams this season.  Led by head coach Ray Portela and his very experienced staff of coaches, the Vikings have had numerous big wins this season and are preparing themselves for a strong finish in the state playoffs.

On Tuesday evening, Sunnyslope would host a very talented Mountain Ridge HS team in an exciting match-up.  Mountain Ridge (17-6) is absolutey loaded with talent - possessing as much or more individual athletic talent than any other team in the state of Arizona.  Led by the play of 6-foot-5 senior guard Jay Green, 6-foot-7 junior wing Jared Rodriguez, 6-foot-6 junior forward Saikou Gueye and 6-foot-4 freshman forward Josh Green, this team has the state's best lineup of players, on paper.

This game was a tough, defensive match-up so baskets were difficult to manufacture.  Both teams would compete hard the entire night, with each team looking to make a run.  After a low scoring second period, Sunnyslope would hold on to a 22-18 halftime lead after a nice basket late from 6-foot-3 senior guard Dane Maggi (pictured).  Maggi is one of the state's best performers and is an excellent shooter of the basketball.  He would have a strong performance on the night for Sunnyslope.

After a third quarter lead for Mountain Ridge, Sunnyslope would not lay down.  After a nice mid-range jumper in the lane by Maggi, and a three-pointer from the wing by 5-foot-10 sophomore guard Jaran Whitfield, Sunnyslope would tie the game again at 42 apiece.

With 4:18 left to play, Saikou Gueye would collect an offensive rebound and score inside to give Mountain Ridge a 48-47 lead.  But Dane Maggi would continue his strong play with a nice three-pointer with 2:10 remainning - giving Sunnyslope a 52-50 lead late.

With :50.3 seconds left to play, Jay Green, who would struggle offensively on the night, would earn his fifth foul on a questionable call.  Green would foul out of the game.  Just seconds later, Mountain Ridge's 6-foot senior guard Dustin Bankowski would get called for a technical foul.

After a banked floater in the lane by freshman wing Josh Green, and with a mere 2-point lead for Sunnyslope, Mountain Ridge head coach Eli Lopez would get called for a technical foul - putting the game out of reach for the Mountain Lions.

Sunnyslope would win the heated battle, 57-53.  After the game, both teams would have to be separated as both teams continued to talk and argue with one another after the game.  The state playoffs are almost here, and the intensity is starting to really heat up.  I am really looking forward to more games like this as we continue this high school season.