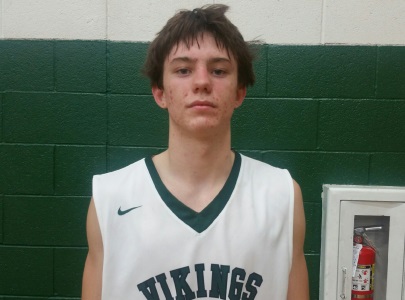 Sunnyslope (8-2) came into Tuesday night's game ready to start a new win streak, after a narrow loss this past weekend in the Hoop Hall West to top-rated Lone Peak HS (UT).  The Sunnyslope team is one of the best and most efficient teams in the West, and have been together for (4) years in high school, for the most part.  This team has also been to the state's championship game for consecutive seasons, and was the winner of last year's 5A State Championship.  The Vikings will now look to return to the state's championship game for a third consecutive season, and defend their title.

The Sunnyslope program, led by head coach Ray Portela and his experienced and dedicated staff looked to be on a flat-out mission on Tuesday evening, as they would host a talented Chaparral team, that also was coming off a loss in the Hoop Hall West event to Crossroads HS (CA), and also a loss to Highland HS last week.  Chaparral had looked terrific in a recent 40-point road win over Desert Edge HS, but, since that performance, Chaparral has now lost (3) games in a row.

On Tuesday evening, in front of a nice home crowd at Sunnyslope High School, the Vikings would get right down to business.  After a competitive 14-6 first quarter, Sunnyslope would build a 20-8 lead in the contest midway through the second period.

The Sunnyslope team is very talented and disciplined, and is a finely-tuned engine.  One of the catalysts for this group is 6-foot-4 senior wing Kyle Fischer (pictured).  Fischer is a very underrated prospect in the state, and is one of the state's most versatile and skilled performers.  Late in the second period, Fischer would knock down (2) consecutive three-pointers - helping the Vikings take a 26-8 lead into the half.

With an 18-point margin going into halftime, and Chaparral looking lethargic as a team in the first half, things would only get worse for the Firebirds from there.  In the third period, while Chaparral would come out with renewed vigor, the Sunnyslope finely tuned offensive engine would rev up also.  Sunnyslope is a seriously experienced ballclub, and they definitely know how to put teams away.  After an uncontested three-pointer from the top of the key from Bryson "Pee-Wee" MeWhinney, then Fischer would convert a nice mid-range jumper from the baseline.  The two players would combine after another three-pointer from MeWhinney, which was created by an offensive rebound and assist from Fischer.  Then Fischer would get back into the offensive act and hit another three-pointer of his own.  After the barrage from MeWhinney and Fischer, Sunnyslope would jump out to huge 40-10 lead with 3:15 left to play in the third period.

From there, both Sunnyslope and Chaparral would turn to their benches for the remainder of the game, as Sunnyslope would cruise from there to a 52-29 win.

The final score though did not tell the story for this game, as Sunnyslope could have won this game by 40 points.  The Chaparral team and head coach Dan Peterson have some serious issues currently to get through, as the team looks to be spiraling downward.  The Chaparral team is loaded with talent, so the fix could come organically as a result of the recent losses.  If not, then it could become a much greater issue for this program.  The Chaparral coaching staff is very experienced, and should be able to rally this team as they build throughout the season.

Recruiting Notes:  The Sunnyslope team is very talented, experienced and disciplined, but neither of these top performers have received considerable recruiting attention thus far, which is absolutely ridiculous when you consider that talent level and accomplishments of each of these young men.

Sunnyslope's Kyle Fischer is a superb talent with excellent physical strength and above average athleticism.  He plays much bigger than his size suggests and is capable of playing strong inside and out on the floor.  He is an absolute mis-match for opposing teams, and could play at the division-I level, if given the opportunity.  The level of college that he eventually reaches will not matter, but rather, whatever level he lands at, he will adjust to the level of competition and will figure out a way to get on the floor and stay there.  I am a true fan of Fischer as a player and absolutely love his toughness and competitive spirit, and believe this young man has a bright future ahead of him on and off the basketball court.  He has had to overcome loads of adversity in his life already up to this point, and I look for him to become a nice role model in the future for other young players over time.

Sunnyslope's Bryson MeWhinney is also, and has been one of my favorite point guard prospects now for some time as well.  While he is very small in physical size, this young man gets a lot done and is a complete performer.  He has excellent offensive skills, combined with an amazing hesitation dribble and herky-jerky body movement at all times, which makes him almost impossible to guard one-on-one.  He has a pure shooting stroke with excellent range on his shot and is able to create off the dribble at any time for himself and other teammates.  MeWhinney will be among the best pure point guards available in the state this spring, so he should benefit nicely from the spring signing period.

Other very good performers on the Sunnyslope team that are worthy of serious recruitment at some level include senior guards Allan Abayev, Jaran Whitfield, Andrew Greb, Terrance Gilder and 6-foot-6 senior post Chris Orozco.  Regardless of level of college, each of these young men have proven that they can play at some level of college basketball, and are deserving of serious college recruiting attention.