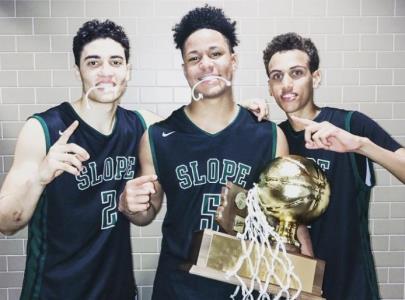 The defending 5A State Champions, Sunnyslope High School (23-5) have been special all season long - displaying a well-disciplined style of play that the state has not seen since the 1980's.  The Vikings began their quest for a third-straight State Championship game berth, and their second-consecutive state title on Tuesday evening at home against a talented Chaparral team.

Chaparral (14-15) has struggled all season to live up to their potential.  A talented group of younger prospects, many of whom will return next season, the Firebirds will have a bright future ahead of them, but this season the team fell very short of their team goals.  While the program is loaded with talented prospects for next season, this season was filled with learning opportunities.  The team play uninspired basketball, while being led by one of the most talented coaching staffs in the state, which includes head coach Dan Peterson, a former professional player, and Mohamad Tangara, a former McDonald's All-American.

Sunnyslope though plays absolutely inspired basketball on both ends of the floor, and does not let up  on either end of the court.  The Vikings do not care about who scores or who plays.  All they care about is one thing - winning.  And it showed once again this season in their match-up with Chaparral, as the Vikings put on an absolute clinic on both sides of the court - blowing out Chaparral for the second time this high school season.

After taking the lead in the game's first period, and with Chaparral still remaining close in the contest, Sunnyslope would finish out the first half strong - finishing with a 16-5 run to blow the game open.

After that, Sunnyslope would not look back as 6-foot senior guard Andrew Greb would collect an offensive rebound and put-back with 1:30 left to play in the third period.  Greb was seriously injured in an earlier game this high school season after falling amazingly hard to the floor on a drive to the basket.  To see Greb back on the court and helping his team to a playoff victory is a sight to behold - an amazing feat by a player whose heart and determination embodies the makeup of this Sunnyslope team.

Recruiting Notes:  While we have spent a lot of time this high school season bringing to light the lack of college recruitment of Sunnyslope's top players.  With each of the top performers of the Sunnyslope team still waiting for their first offer, except talented 6-foot-5 senior wing Kyle Fischer, who is still one of the most under recruited top-rated prospects in the West, 6-foot-6 unsigned senior post Chris Orozco is a rare find in the state.  Orozco has held down the post position for Sunnyslope at the varsity level for four-straight seasons, and has been the team's only true post each season.  Think about this, as the program's only true post player, Sunnyslope has flourished for four straight seasons and won a lot of basketball games, including a potential second straight 5A title.

An undersized post player for the division-I level, no student-athlete in the state is tougher than Orozco and competes harder.  Orozco consistently gives up his body for the sake of winning, and is an enforcer on the glass and inside the paint.  A very unheralded post prospect in the state, Orozco will make some college program happy this spring, at whatever lands he lands at, as a result of his toughness and work ethic.