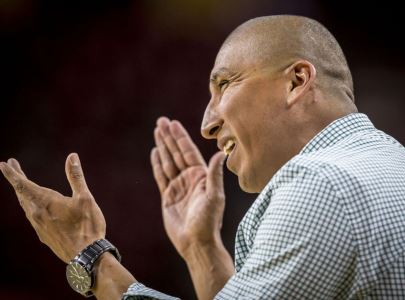 With the Christmas holiday approaching us very soon, and everyone focusing their attention to their families this week, there was still a little time for some quality basketball, as the state's top two teams in the 5A Division faced off again.  In a highly anticipated rematch between 5A defending state champion, Sunnyslope High School (10-2), and surging Deer Valley (11-1), the excitement was definitely in the air, as these two teams matched up to gain an edge on one another for bragging rights.

The last time these two teams met was in the pre-season, in the Hoopsgiving Basketball Tournament held at Sunnyslope High School.  While the tournament was held on the home floor of the Vikings, Deer Valley would shock Sunnyslope on their home floor, 55-52, in a statement game that had everyone in the state excited to see the next contest, while also proving what I had stated before the season - Deer Valley is for real.  Loaded with a lot of young talent, and combined with some good senior talent, Deer Valley has the potential to win it all this high school season.

On Monday evening, our staff and many fans in attendance left the gymnasium completely feeling much different.  While everyone in attendance has a different variety of emotions from the events that took place Monday evening, one thing was very clear in Sunnyslope's serious beating of Deer Valley on the Skyhawk's home court Monday.  In the lopsided 54-30 victory by Sunnyslope over Deer Valley, the Vikings again proved their tremendous discipline as a team, and their selflessness as a group, as they shared the basketball and developed quality shots down the floor for each other.  They are very well coached, do not care about who on their team scores and gain enjoyment through seeing their teammates have success, which creates a passing community where the team thrives.  Their bench, whether in the game or not, cheers for their teammates on the floor and is waiting to provide support for them as to come to the bench.  Players are not worried about playing time, or what happens on the floor, as long as it leads to wins.

With 4 minutes left to play in the game, and with Sunnyslope in control of the contest, senior guard Andrew Greb drove hard to the basket, and finished a strong drive after being fouled on the play.  Greb finished the layup, only to fall extremely hard to the floor and suffer a serious injury to himself.  Greb lay on the floor for 20 minutes without moving, until the paramedics arrived and rescued him.  While Greb and his family are definitely in my prayers, and I pray for a speedy recovery for him, all I could think of was this young man's determination to finish the play, and help his team win.  It is super unfortunate what happened as a result, and there was absolutely no foul play involved in the defensive effort to stop his drive.

This Sunnyslope team, as I have said many times now over the past several years, is absolutely special, and I enjoy watching them play as often as possible.  There are no ranked players on this team, and no one is being recruited at a high level, although they deserve to all be recruited immensely by the right level of college program, but they are all extremely coachable and play to win the game - that's it.  For many of you out there that are purists of the game, you need to flock to see this team play this season.  The great thing is that if you don't get to see them much this season, then, do not worry, because the younger group coming up plays in the same manner.

It's not just the personnel, although this group has set the stage for the future for the Vikings' program, but it is also a culture that was created by legendary head coach Dan Mannix, and was handed down to his protege Ray Portela (pictured) and his staff.  Portela, who was a iron-clad warrior of a guard when he was a player for the school, has done an amazing job of developing these young men into winners.  He has taught them the meaning of hard work and discipline - on and off the court.

Star senior guard/forward Kyle Fischer is a tremendous product of such coaching and development.  I love watching this young man play, and he has become one of my favorite sleeper prospects in the state.  While I also love several other prospects on this team that deserve attention, Fischer overcame a very troubled past as a freshman, and was given an opportunity to become a part of a state championship team.  He is now changed forever.  Playing for this Sunnyslope team and giving up his desires off the court, to become a winner, is the American Dream.  I never give up on kids, and this Sunnyslope staff and team did not give up on Fischer.  Fischer will become one of the most sought after recruiting targets in the state this spring - trust me.  More importantly, he will now be successful in life; in basketball and after basketball.

I am not guaranteeing that Sunnyslope will win the 5A state title this season, because there is a lot of basketball to be played still, and anything can happen with injuries, as evidenced on Monday evening, but I am stating the obvious and marveling again at how great it is to watch good basketball, and kids that enjoy playing it.

The Deer Valley team is absolutely talented and has the potential to turn it around quickly - simply through buying into what head coach Jed Dunn is teaching them.  They have loads of ability and much more size and length than the Sunnyslope team has - they just need to play with the same heart and determination they showed in November, and not just with their skill level, which definitely let them down on Monday.  Play together and play to win.  Play for the team and not the fans.  Either way, look for this loss for Deer Valley to fuel them the remainder of the season.  It was their first loss of the season, and I look for them to absolutely roll the remainder of the season.  I feel sorry for the Goldwater HS team they will face on Tuesday evening (12/19).

Sunnyslope and Deer Valley are simply two different teams on paper - one team, Sunnyslope, is blue collar, and Deer Valley needs to become that way to maximize their potential.  This is going to continue to be a great season, and I can't wait to see how the remainder of the season unfolds.  One thing I will again guarantee though, is that these two teams will meet again.  And the next time, it will be the rubber-match.  Both teams have shocked the other on the other's home floor.  There will be no surprises next time for either team.  Instead, we will see the best game of all three.