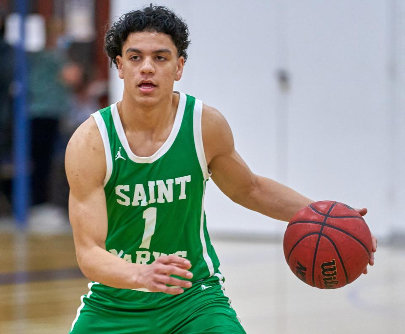 One of the top overall prospects in the state has been preparing for this all of his young life - to play basketball at the highest level. Over the past two seasons, St. Mary's High School's gifted 6-foot-2 rising junior point guard prospect Styles Phipps has made a major name for himself through playing at a high level and being so young. Now entering his junior season, Phipps will be asked to lead a St. Mary's basketball program that has lost some key players from last year's team to graduation and to transfers. This is only setting up Phipps to have a major junior season, as he still looks to lead the Knights to the top of the state's 4A Division.

Phipps will have his work cut out for him, as he will be completely keyed on by every opposing team's defensive efforts next high school season. The plan will be simple, stop Phipps. Phipps will lead a band of young Knights' players that will include promising 6-foot-7 sophomore forward Caspian "Cash" Jones, who is one of the top overall 2025 prospects in the state. The combination of Phipps and Jones will need to be very good for the Knights this high school season, since the program recently lost Seydou Tamboura to a transfer to PHH Prep, and the program also lost the services of another potential transfer from the summer. Now the Knights will rely heavily on the scoring and playmaking of Phipps. As Phipps goes, as the Knights will go.

Phipps is coming off another good club season for himself, while playing for Dinos Trigonis and his Belmont Shore (CA) program. Phipps' spring and summer was highlighted by a strong performance at this summer's Pangos All-American Camp in Las Vegas, NV, in June. Phipps was among the top guard prospects in the camp, and held his own among the top 2024 prospects in action. Phipps is a superb guard talent in America's 2024 Class, and he now has the offers to prove it.

Phipps has currently received offers from Auburn, TCU, Washington, Washington State, Missouri, Portland, UC-Santa Barbara, San Diego, Wastern Illinois and Hampton University. He has loads of Division-I interest, and I would expect him to receive many more offers this junior season, in preparation for a big summer in 2023.

Phipps should post some serious numbers this high school season, and rank among the top individual producers in the West as a junior. Phipps' scoring numbers should increase a great deal this junior season, as he will look to keep his team in games. This however may not be the best look for Phipps, who is a point guard and will be auditioning to run a Division-I college program. It will depend heavily on the college program's interpretation of the point guard position, or what they are looking for, as Phipps will be considered a scoring point over the next couple years of high school basketball. Phipps has always been raised as a floor general that can create for his teammates, so this will also be a new role for Phipps, who already seems to love to score.

Phipps is well beyond his years as a basketball player and as a person. Raised thoroughly and hard, but with love, by his father Simon Phipps, Styles was built for everything that he is currently going through today on the basketball court. Simon's father played collegiately and professionally, while also having a stint with the Harlem Globetrotters.

Whether as a scorer or as a facilitator, Phipps enjoys having the basketball in his hands. The ball is a string in his hands and he is almost a magician with the basketball. Phipps has put in countless hours of ball handling and practice for himself over the years, and it seriously shows in his approach to the game. He is difficult to defend as a result of being able to get anywhere he wants to on the floor. He almost toys with his defenders at times, which can be a blessing and a curse. Because Phipps can almost do what he wants, he will continue to develop when and what to do with the basketball, as the game simply comes easy to him. But not without the countless hours of hard work that he has put into his craft. Phipps is fundamentally sound and looks like he is having fun every time he plays, as a result.

Phipps pushes the basketball up the floor to the open man, and plays fast, but in a controlled manner. He dissects defenses and surveys the floor - looking for cutters or the open man on the floor. He is a good shooter of the basketball wit range, and will really develop in this area over time. He has an excellent mid-range game and is becoming much more consistent from longer ranges. He is a very good rebounder for his size and position, as he has a serious knack and nose for the basketball. His best attribute though is in his ability to defend. When he locks in defensively, he is very capable of becoming a serious lock-down defender over time - an attribute that will benefit him a great deal throughout his high school career and down the road.

Currently, Phipps does not have a clear leader for his services yet, and he is still very early in his college recruitment. I expect his recruitment to take more shape this junior season in preparation for a decision during the fall of his senior year. There have been indications yet of an early college decision.

I look forward to watching Phipps in his junior season, as it will take a monumental effort from him as a junior, but not just as a scoring machine, but also as a leader of a young group of players, if St. Mary's is to have a successful season. I believe Phipps has it in him, and it will be fun to watch him develop as a leader this season.