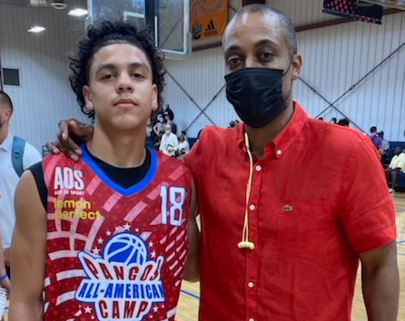 One of the elite overall prospects in Arizona's 2024 Class is St. Mary's High School's gifted and mature 6-foot-1 sophomore guard Styles Phipps. Phipps is currently our #2 overall prospect in the class, but is fighting for our top overall spot, after a terrific freshman season where he helped lead the Knights to a 4A State Championship and a strong spring and summer showing that has elevated him nationally among his peers in the 2024 Class. Many college coaches, scouts and media have taken notice of Phipps, who is now another Arizona basketball prospect on the rise.

Phipps is well beyond his years as a basketball player and as a person. Raised thoroughly and hard, but with love, by his father Simon Phipps, Styles was built for everything that he is currently going through today on the basketball court. Simon's father played collegiately and professionally, while also having a stint with the Harlem Globetrotters. Styles, like his father, is a point guard. But unlike his father, who was a big-time scorer of the basketball, Styles is a true point guard that likes to pass first.

Last high school season, in his mere freshman campaign with the St. Mary's team, Phipps earned his playing time immediately at the start of the high school season, when he was inserted to the lineup early in the home contest against eventual 6A State Champion Sunnyslope High School. With Sunnyslope's strong and athletic point guard Oakland Fort giving the Knight's all they could handle, Phipps would apply excellent defensive pressure on Fort throughout the game, which allowed St. Mary's to climb back in the contest. While Sunnyslope would earn a nice 59-51 road win, Phipps would be cemented in the Knight's lineup for the remainder of the season.

Phipps would go on to have a terrific freshman season on a loaded Knights' lineup which included numerous Division-I prospects - the most talented high school team from top to bottom in the state.

Since the end to a strong freshman campaign, Phipps has continued his strong and advanced play this spring and summer. His highlight of the off-season was his insertion into the prestigious Pangos All-American Camp in Las Vegas in June. While one of only several very young prospects in the event, Phipps (pictured with NBA veteran Rod Strickland @ Pangos) made the best of his opportunity in the event, and played at a high level. Phipps' performance raised many eyebrows at the event and, ultimately, raised his stock with the many scouts and media in attendance. Phipps also played very well in the Section 7 event, and helped St. Mary's have an excellent finish - earning numerous big wins over top-rated opponents.

While still only a mere freshman, Phipps has already earned offers from TCU, Western Illinois and Hampton University. TCU, his biggest offer to date, came recently, as a result of his play this summer. With several offers on the table for himself already, it is just a matter of time for Phipps, as many offers will soon be pouring in for him, over time. The TCU offer and any offers up to this point, this early in his college recruitment, suggests that Phipps will definitely be and develop into a high-major Division-I prospect. With continued hard work and development, Phipps should be able to round into an elite high-major prospect over the next few years.

Phipps is in a great position, literally, as he has a true position as a floor general from the point guard position. The ball is a string in his hands and he is almost a magician with the basketball. Phipps has put in countless hours of ball handling and practice for himself over the years, and it seriously shows in his approach to the game. He is difficult to defend as a result of being able to get anywhere he wants to on the floor. He almost toys with his defenders at times, which can be a blessing and a curse. Because Phipps can almost do what he wants, he will continue to develop when and what to do with the basketball, as the game simply comes easy to him. But not without the countless hours of hard work that he has put into his craft. Phipps is fundamentally sound and looks like he is having fun every time he plays, as a result.

Phipps pushes the basketball up the floor to the open man, and plays fast, but in a controlled manner. He dissects defenses and surveys the floor - looking for cutters or the open man on the floor. He is a good shooter of the basketball and will really develop in this area over time. He has an excellent mid-range game, very rarely seen from the point guard position, or even from a prospect as young as he is. As he develops consistency from longer ranges, watch out. He is a very good rebounder for his size and position, as he has a serious knack and nose for the basketball. His best attribute though is in his ability to defend. When he locks in defensively, he is very capable of becoming a serious lock-down defender over time - an attribute that will benefit him a great deal throughout his high school career and down the road.

While it is still very early in the recruiting process for Phipps, he is making a case early. Recently, during the first July NCAA Evaluation Period, Phipps played very well in the Pangos Super 80 Event - making a game-winning three-pointer in one of the games of the showcase event. He also played for a loaded Belmont Shore (CA) team in the Pangos Sweet 16.

I look forward to watching Phipps this week in Las Vegas, and also following his play and development throughout his high school career.