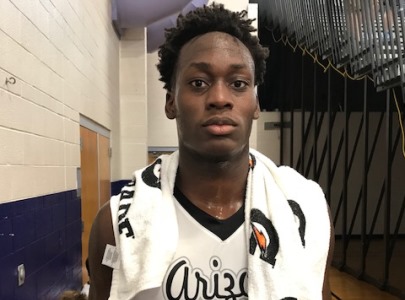 It has been a very interesting and difficult road, but it is headed to end in fine fashion for Hillcrest Prep's 6-foot-7, 225-pound senior forward Stephan Gabriel.  After playing very well in several events this summer and raising his recruiting stock a great deal, and after taking a couple recruiting visits, Gabriel has decided to end his college recruitment - giving a verbal commitment to Bradley University in Illinois, and a member of the very competitive Missouri Valley Conference.

Gabriel showed off a versatile and athletic playing style that brought him a lot of attention, as Gabriel developed as a player a great deal over the past several (6) months.  He worked hard on his craft and developed himself into a legitimate small forward prospect - playing much more unselfish as a player, and making good decisions with the basketball.

While playing in Las Vegas for the Arizona Monsoon, which included Pinnacle High School's sharp-shooting guard Trent Brown, Gabriel played numerous positions and showed excellent versatility.  Gabriel handled the basketball in the open floor from the guard position, scored off the dribble and from the perimeter in the half-court set and made plays for himself and others - showing a good understanding and feel for the game.  Gabriel's sheer size, strength and athleticism on a college-ready body also were very attractive traits that had college coaches very intrigued.

The road for Gabriel has been a long and difficult one - filled with many challenges.  A native of New Jersey, Gabriel moved to the state of Arizona last fall to play for AZ Compass Prep and their national team, and to ultimately improve his college recruitment.  After several obstacles faced Gabriel's present and future life, the young man utilized his survival skills to ultimately land at Hillcrest Prep, after a short stint with Planet Athlete in the spring.

Gabriel is now on pace to graduate this spring.  He still needs to receive a passing test score with the NCAA to complete the NCAA academic qualification process and to be eligible for division-I athletics - something he is working hard on at Hillcrest Prep with the coaching staff.

Congratulations to Gabriel and his family on this amazing accomplishment for himself and his future, as well as the Hillcrest Prep program.

Arizona Hoop Review Scouting Report:  Gabriel is a native of New Jersey and recently moved to the state for his senior season.  He is a unique prospect in the state, as very few prospects possess his combination of size, physical strength and athleticism.  He plays well above the rim and is a force on both ends of the floor.  He has excellent work ethic and competes at a high level - playing very hard at all times and looking to make a play consistently.  He is a versatile prospect that should be able to develop into a consistent wing prospect over time.  He has a solid shooting stroke with range on his shot, but is at his best from mid-range currently.  He has a good handle of the basketball and excellent explosion off the dribble.  He is an excellent finisher, especially in the open floor where he attacks the rim hard.  A good passer that looks to get teammates involved and pushes the ball up the floor in fast-break situations - leading the break.  An active and strong rebounder that rebounds outside of his area.  An excellent shotblocker with long arms and big hands.  His level of intensity and eagerness can get him in foul trouble at times, so he will need to channel his energy in the right manner to stay on the floor.  A sure-fire talent and an excellent sleeper prospect.