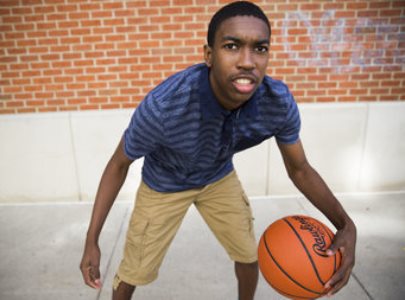 GOODRICH, MI – Carrington Wiggins will be far away from home this school year.

Goodrich’s leading scorer has accepted a new challenge on the West Coast.

Wiggins, 17, has decided to leave Goodrich High School to enroll at AZ Compass Prep in Chandler, Ariz. He will take off early next week.

“I would like to thank God, my Coach (Gary) Barns from Goodrich High School and the coaching staff.”

As a junior, the lengthy 6-foot-1, 150-pound combo guard averaged a team-high 17 points, 2.8 rebounds and 2.3 assists. Over the summer, he blew up on the AAU circuit while playing for Lansing-based Elite Nation but has yet to receive an offer.

“I want to still follow my dream to go D1 and that’s one reason why I’m going to Arizona,” Wiggins said.  “I have to do well in the classroom. I’m nervous to leave my family because I’ve never been by myself. It’ll be exactly like college.”

The Martians finished the 2016-17 season with a 13-10 overall record after falling to Northwestern in the Class B district finals. Wiggins scored 10 points in his final Goodrich game, but posted a career-best 35 points in a February win against Clio. He played on varsity at Goodrich in all three seasons.

"This was a very, very hard decision, but we had to take the chance," said Roderick Wiggins, Carrington's father.

Former Michigan State basketball player Ray Weathers is the head coach at AZ Compass Prep. The 1993 Jackson High School graduate averaged 9.0 points in 86 games for MSU from 1994-97 before enjoying a brief stint with the NBA’s Phoenix Suns in 2003-04, then in the CBA and several stops overseas.

Barns learned the news on Friday afternoon and wished him the best of luck.

“I’ll do anything to help, that’s my thing,” Barns said. “It’s never been about me, it’s about the players. The kid has to be happy. As long as he’s happy, I’m happy.”