St. Mary’s rolls past Mountain Pointe in second round 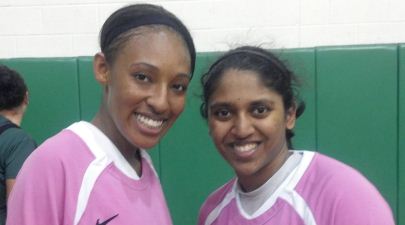 The state of Arizona has not seen a team like this year's version of the lady St. Mary's Knights in some time, maybe ever - boys or girls teams.

The nation's #1 team and the defending state champions, St. Mary's plays a brand of basketball unlike any seen at any level of basketball today. The Knights play an unselfish, uptempo style of basketball that thrives on intensity on both ends of the floor. What is most impressive about the Knights is that they play this way for 32 minutes - regardless of the score or the opponent.

Want to learn how to play the game of basketball - just watch the Knights. Led by head coach Curtis Ekmark, who has done an amazing job of instilling his disciplined system into his girls, the Knights are literally on cruise control at this point in the season.

The Knights would again prove their dominance Friday evening in the second round of this year's Division-I state playoffs - blowing out the Mountain Pointe Pride, 76-38, at home in front of a large crowd.

With news stations, media and a large crowd of fans in attendance all to support the nation's premier team Friday evening, the Knights would jump out to an amazing 36-5 lead after the first period. With each player on the floor contributing in some manner, the Knights looked as if they were playing against something more than Mountain Pointe's girls basketball team.

After flawless passing of the basketball in the period, 5-foot-9 sophomore guard Dominique Williams would finish off the quarter with a strong drive to the basket.

At that point, I would put away my game notes and simply enjoy watching a team that competes at a high level and plays together in such a manner that I have not seen before.

The Knights would pump in an amazing 58 points in the first half - leading at the half, 58-15.

With the Knights exhanging substitutes throughout the second half, and emptying their bench for the majority of the half's action, the Knights would only score 18 points in the second half - winning the game 76-38 and advancing to the state quaterfinals.

Grind Session All The Smoke Classic