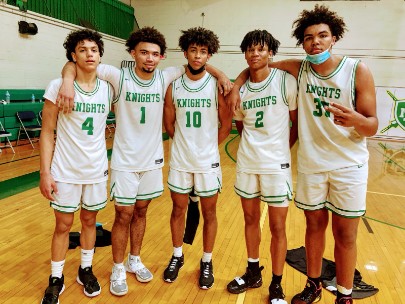 In an exciting first round state playoff match-up in the 4A Division Wednesday night, #1 seed St. Mary's High School hosted #16 seed Notre Dame Prep on their home floor in the best high school basketball atmosphere that we have seen all season long, as the AIA is now permitting more fans in the gymnasiums, just in time for the state playoff action and excitement. In front of a nice-sized home crowd, the Knights got down early to a very well-coached and prepared Notre Dame ball club, that had their sights on a big first-round upset.

St. Mary's (17-1), our #2 overall team in the state and our top program in the 4A Division, is still young, but they are loaded with future Division-I talent. When coaching young prospects, it is a process, as this group of young Knights from St. Mary's have had an excellent season, but have yet to play in a state playoff game during the pandemic. After failing to win it all last season, this Knights' team is locked in and focused on winning it all this season, but Wednesday evening would present some new challenges for Head Coach Damin Lopez and his experienced basketball staff - challenges that they have not faced all season.

Notre Dame Prep (9-8) is the best version of a #16 seed that I have seen in some time, as the team is talented, skilled and very well coached. Notre Dame Head Coach Luke DallaRiva and his staff have done an excellent job all season long in preparing their troops for this opportunity. After an up and down season, Notre Dame won their final two games on the season, and came into Wednesday night's contest ready to make some serious noise, and get the big first-round upset. With a strong game plan designed by DallaRiva and his staff, it would look a huge upset was in the works immediately in the contest.

DallaRiva has a nice coaching resume, and spent his recent years coaching at Grand Canyon University before taking the Notre Dame job. I have not seen a team better prepared, as he and talented assistant coach Dan Strickland prepared their team for such a loaded opponent as St. Mary's. But St. Mary's is just as well coached. Head Coach Damin Lopez, a legendary player himself from the state and Pepperdine, is also a former D-I assistant coach from Pepperdine University, and his assistant Josh Lowery is a former player from Pepperdine and a very gifted former college coach from Central Arkansas. The two coaching staffs are as good as you will find in Arizona high school basketball at any level - making for a superb coaching duel in this first round playoff contest.

Notre Dame would pack their defense in the paint early, forcing St. Mary's to shoot from the perimeter consistently in the first period. St. Mary's would start the game off very cold from the field and get down early, while Notre Dame would get hot from long rang and push the ball in transition every chance they got. Notre Dame would jump out to a 19-12 lead late in the first quarter, before a mid-range jumper by 6-foot-6 junior Garrison Phelps just before the buzzer would make the game 19-14, Notre Dame, going into the second period.

In the second period, a nice two-handed dunk by Phelps would narrow the Notre Dame lead, 19-15, with 7:35 left to play in the half. Late in the second period, after already receiving a technical foul in warm-ups on a very questionable call, Phelps would earn a second technical after showing excitement and clapping his hands after a foul was called on Notre Dame. The second technical would send Phelps to the locker room - removing him from the remainder of the game. With St. Mary's still looking to take the lead in the game, the subtraction of a very talented Phelps from the Knights' lineup would give the St. Mary's coaching staff a lot to consider for the second half, as Notre Dame would take a 29-23 lead into halftime.

With no other choice in the second half but to get major support and help from their bench, Lopez and his staff would have to get creative in the second half - looking to come back from an early onslaught from Notre Dame, and also make up for the lost production from Phelps. The Knights would get the help they would need from their bench, and also get an inspired effort from rising star 6-foot-4 sophomore guard Jason Fontenet.

Behind the strong play of Fontenet and rising star freshman guard Styles Phipps, St. Mary's would turn things around in the second half. The Knights' bench would also come up big in the second half. After a three-pointer from 6-foot-2 senior Isaac Mendoza with 4 minutes left in the third period, the Knights would stop a run by Notre Dame, and start to get going.

St. Mary's would then cruise to a 54-42 victory, in what was anything but a normal first round match-up between a 1 and 16 seed.

It remains unclear as to whether St. Mary's ultra-athletic 6-foot-6 junior Garrison Phelps will be eligible to play in the second round match-up with Bradshaw Mountain. There could be an appeal made by the St. Mary's coaching staff, as the first technical foul received by Phelps in warm-ups for a near-dunk attempt was absolutely ridiculous, and had nothing to do with the actual game. If this game is truly about the kids, then sitting a player for such a non-game play would be traumatic. These student-athletes have already endured enough this season - missing much of the season due to the pandemic. This needs to be corrected. Phelps deserved a warning, not a technical foul. It was almost as if the referees were looking to level the playing field in this contest with such calls that really had nothing to do with the playoff game.

Recruiting Notes: This game was loaded with college prospects, but also some superior young talent for the future. St. Mary's rising star freshman guard Styles Phipps is a superb young talent, and received his first Division-I offer this week from Western Illinois University. This should become the first of many offers from Phipps, who is as skilled and confident as a freshman prospect as I have seen in some time.

Notre Dame Prep 6-foot-2 freshman guard Anthony Batson Jr. is also a big-time talent for the future. The freshman guard has an excellent body with athleticism, and a nice overall skill level. Batson is a superb young talent as well, and, if he stays at Notre Dame Prep under the terrific coaching staff of DallaRiva and Strickland, this young man should develop into a serious Division-I prospect himself. He definitely has a bright future ahead for himself and is among the elite 2024 prospects in the state.