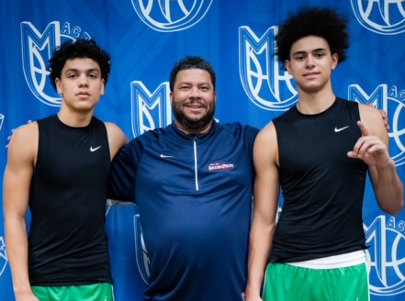 With the exciting start to the Arizona High School basketball season upon us, and numerous Thanksgiving Pre-Season Tournaments scheduled for next week all around the state, some high school teams are kicking off the 2022-2023 high school basketball season for us this week. Two of the state's top two teams and programs from the 4A and 5A Divisions will meet up on Saturday evening, as St. Mary's High School will go on the road to take on Notre Dame Prep in a very exciting contest. While both teams represent to different divisions for the AIA, this is an excellent early season match-up to kick off the high school basketball season, as this season will be an exciting one - utilizing a shot-clock for the first time in Arizona history, as well as a new Open Division for the AIA programs.

It will be fun to see these two top-rated programs meet up this early in the season, as both programs have come a long way, since they previously met in the first round of the 4A State Playoffs two years ago. At that time, St. Mary's was absolutely loaded with young talent across the board, while Notre Dame Prep was very young and on the rise in the state. Now, two seasons later, St. Mary's looks a lot different, as the program has graduated many of those previous top performers, and also lost a couple players to transfer. Notre Dame Prep has matured as a program, and also received a nice shot in the arm of young talented prospects last season, which now lead the program.

St. Mary's High School (0-0) and Head Coach Damin Lopez lost star guard Jason Fontenet since then to a transfer (Bella Vista Prep) last season, and now also Seydou Tamboura to a transfer (PHH Prep) this high school season. As a result, the Knights are rebuilding under the strong play and leadership of star 6-foot-2 junior point guard Styles Phipps, who is as good a guard prospect as there is in the state, regardless of high school or prep classification. Phipps (pictured left) is coming off a 55-point outburst this fall, which proves that he is set to go on a tear this high school season, as he looks to lead St. Mary's as far as he can take them. Phipps is receiving loads of Division-I recruitment now, and his junior season should land him many new high-major Division-I offers, as he has turned in two consecutive strong seasons thus far, and is still only a mere junior prospect.

Phipps will have a lot of help this season from the addition of gifted 6-foot-7 sophomore Caspian "Cash" Jones. Jones (pictured right) transferred to St. Mary's in the spring (2022), after a strong freshman campaign at Phase 1 Prep Academy, and playing major minutes against stiff competition and performing at a high level. Jones had an excellent fall for himself, which included a Top 20 performance @ the Pangos All-West Frosh/Soph Camp. Jones is a tremendous talent for Arizona's 2025 Class, and his versatility and overall skillset will be big for Damin Lopez and the Knights this season, as the team will look to play fast and will lack any true size in the post.

Notre Dame Prep (1-0) began their season this week with a nice 90-75 victory over Casa Grande High School. Head Coach Luke DallaRiva is one of the top young coaches in the state, and he has quickly built a very strong program in the 5A Division. After finishing with a 19-9 overall record last season and falling in the 5A State Playoffs to Deer Valley High School, Notre Dame Prep is now primed to have a big breakout season for their program.

Notre Dame Prep is led by the strong play of do-it-all junior guard Anthony Batson, who is among the state's top prospects in the 2024 Class. Batson put up very strong numbers as a freshman and sophomore for this program, and is ready to explode in his junior season. Batson's superb athleticism and strong body are imposing, and allow him to play at a very high level. He will post big numbers all season for this talented group. Sophomore talents, 5-foot-11 point guard Brennan Peterson and 6-foot-3 shooting guard Bryce Quinet are among the state's top prospects in Arizona's 2025 Class, and they are the future of the program. The trio of Batson, Peterson and Quinet is a formidable group for DallaRiva to build on, and are a strong reason why Notre Dame Prep will compete for a 5A State Championship this high school season.

This is an excellent early-season match-up for these two programs, and will create some nice excitement for the Arizona basketball community this weekend, as the game will take place Saturday evening @ 7PM @ Notre Dame Prep. Lets go!