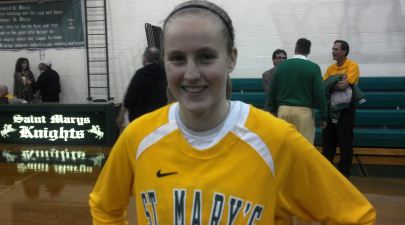 St. Mary's (28-0) girls continued their terrific season and pursuit of another state championship Monday evening with a big, 77-39 win over Desert Vista (25-7).

After a slow start to the game, the Knights poured in 52 points in two quarters to blow the game wide open - advancing to the Division-I semi-finals.

St. Mary's looked flawless in the first quarter of their last performance - a huge playoff win over Mountain Pointe HS. In the first period of Monday's quarterfinal playoff match-up with Desert Vista, the Knights struggled early as they would miss many scoring opportunities - but that would not last for long for the nation's top team.

With 2:12 left to play in the first period, 6-foot sophomore guard/forward Courtney Ekmark would connect on a three-pointer to put the Knights ahead 12-6.

St. Mary's head coach Curtis Ekmark would then put on a fullcourt press that would lead to numerous, and I mean numerous turnovers for his team. After a steal and a three-point play from Courtney Ekmark, and an inside basket from Cortnee Walton (University of Louisville signee) to end the quarter, the Knights would take a 17-10 lead into the second period.

In the second period, the Knight's press would prove to be too much for the Thunder, as Desert Vista would fail to inbound the basketball or even get the ball past halfcourt on numerous occasions over a 2-minute span in the period. St. Mary's would build their lead to 27-14 with 3:57 left to play in the half.

5-foot-11 senior forward Shilpa Tummala (Harvard University commit) would score inside after being fouled, then Ekmark would make a nice hesitation dribble then finish with the left hand to put the Knights ahead 33-15 with 2:58 left to play in the half.

After a 25-point second period, the Knights would not look back from there. They would then pour in another 27 points in the third period to put the game well out of reach.

The Knights would then empty their bench in the fourth and cruise to a 77-39 playoff victory - advancing to the semi-finals where they will now face #7 seed Dobson HS on Thursday evening at Jobing.com Arena.

Broncos Charging Their Way Into State