St. Mary’s Bounces Back With Big Win Over Bishop O’Dowd 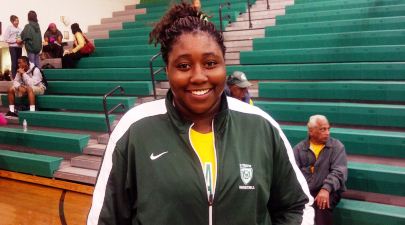 Bishop O'Dowd would jump out to a 9-6 early in the first period, but St. Mary's, playing in a much more fluid offensive style than their previous game, would come back to take a 14-9 lead with 1:45 left to play in the first period, after a three-pointer from the top of the key by 6-foot-2 senior post Chantel Osahor (Univ. of Washington signee).

After a late three-pointer from junior guard Maya Williams, Bishop O'Dowd would come back to take a 17-16 lead after the first quarter.

The second period would see both teams fighting to take an advantage.  After a 3-pointer from 6-foot-2 junior guard Courtney Ekmark (UCONN commit) with just a minute left to play in the first half, St. Mary's would take a 27-25 lead.  Another late layup by 5-foot-9 senior point guard Danielle Williams (Univ. of Michigan signee), and the Knights would finish the second period with a tie game at 29 all.

The third period would continue with a war between both teams.  After another three-pointer from the wing from Chantel Osahor, St. Mary's would jump out to a narrow 37-35 lead with 4:15 left to play in the period.  A steal and a transition three-pointer from Danielle Williams would give the Knights a 40-35 lead with 3:26 left in the period.  Then, just before the buzzer, another three-pointer from Danielle Williams, after a drive-and-kick out assist from her sister, 5-foot-9 senior guard Dominque Williams (UCLA signee), would give the Knights a 43-39 advantage after three quarters.

In the final period, St. Mary's would continue their momentum in the game.  A no-look back-door pass from Chantel Osahor to a cutting Courtney Ekmark, who would finish the play with a left-handed layup around her defender, would put the Knights ahead 45-39.  St. Mary's would then take their biggest lead of the game, 48-39, after a three-pointer from Ekmark with 6:35 left in the game.  With 3:15 to play, the Knights would make the margin 9-points, 54-45, after a driving layup by Chantel Osahor.

Bishop O'Dowd would make the game very interesting down the stretch after a 25-foot three-point bomb from Maya Williams with :37 seconds left to play in regulation.  The three-pointer would narrow the margin to 3 points, 58-55 in St. Mary's favor, but Courtney Ekmark would convert 5 of 6 free-throws after being fouled in the final 30 seconds of the game to give the Knights the big 63-60 victory.

"We were ready tonight," said St. Mary's 5-foot-7 senior guard Chloe Johnson (San Diego State signee) after the game.  "We played much more together tonight.  We have a lot of work to do still, but it felt good to get this win."