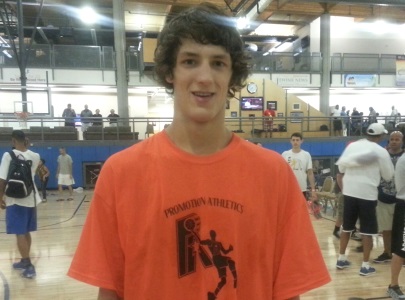 One of the premier available unsigned senior prospects in Arizona's 2014 class is Gilbert High School's 6-foot-7 senior forward Spencer Nicolds.  Nicolds has flown well below the recruiting radar this high school season, and is just recently beginning to pick up serious attention from college coaches.

As a result of Arizona's 2014 class being so strong, many prospects in the class have seen their college recuitment suffer this year - with many top-rated prospects in the state still being available after going almost unnoticed.  Nicolds is one of these prospects.  In a normal year, a player of Nicolds' caliber would receive much higher college recruitment.  Instead, Nicolds is still available this late in the spring.

This week, Nicolds received an offer from Idaho State University and head coach Bill Evans and his staff.  Assistant coach Jay Collins has been very instrumental in the college recruitment of Nicolds.

Nicolds has scheduled an official recruiting visit to the campus next week (May 1-3), and is also strongly considering a verbal commitment to the program.

"If I commit, I'm not gonna decommit," said Nicolds.  "My word is as good as my signature."

Nicolds will travel with his club program, the Arizona Magic Pump N' Run 17U, to Anaheim, CA this week to participate in the Double Pump Spring Hoop Fest - one of the first NCAA certified events of the spring.  There will be many division-I college coaches in attendance at this weekend's event.

Nicolds is not a big-time scorer, but he is a talented prospect with excellent versatility and toughness for the wing position.

Arizona Preps will continue to follow the recruitment of Nicolds closely - bringing you updates as they begin to develop.

Arizona Hoop Review Scouting Report:  Nicolds is a long and talented prospect that can finesse or overpower opposing players.  Nicolds is still developing as a post player, but sees the majority of his time on the wing, as a 3/4 combo that can score in a variety of ways.  He is a very active rebounder that rebounds consistently outside of his area, and has good overall quickness to the ball for his size.  He has excellent lift off the floor and is an excellent finisher at the rim.  Nicolds is a big-time dunker that plays well above the rim.  He runs the floor extremely well and is capable of beating most post players up the court.  Nicolds is also able to play on the perimeter very well, since before his latest growth spurt, Nicolds primarily saw his time as a point guard – making him very skilled overall as a prospect.  Nicolds is a good ball handler that likes to put the basketball on the floor in an attempt to get to the basket and finish.  He is a solid shooter  shooter with range on his shot and also possesses a mid-range game.  Nicolds is a strong defender that accepts challenges on the court – often defending the opposing team’s top offensive threat.  Nicolds is an active shotblocker and has excellent timing.  He quickly has developed into a mid-major plus prospect.