Spartan Dynasty Still On The Rise 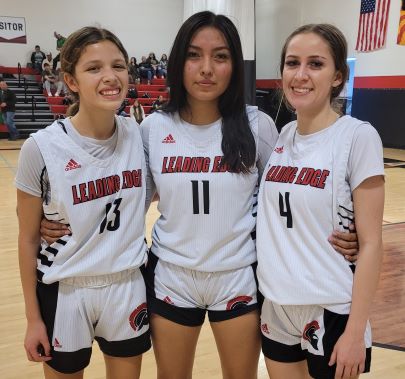 Leading Edge Academy in Gilbert has been a small school powerhouse for girls' basketball over the past decade. Coach Erik Gray has done a phenomenal job in keeping the winning culture going for his Spartans. After huge success, Coach Gray’s Spartans transitioned from the Canyon Athletic Association (CAA) to the Arizona Interscholastic Association (AIA) during the 2016-2017 season. Immediately, the Spartans compiled an impressive resume with (1) State Championship, (1) State Runner-Up, (1) Elite 8, (1) First Round and (2) Final Four Finishes, since entering the AIA.

This year’s Spartans are talented, have the skill and ability to make a deep playoff run in 2A. They are currently ranked #6 statewide and #2 in their region. The region is composed of state contenders in San Carlos, Miami, Arete Prep and Gilbert Classical. If the playoffs began today, five out of six teams in the region would qualify for the state tournament.

I was able to cover the Spartans game against Miami. Unfortunately, the Spartans came up short, however three players really stood out to me:

Harness is an elite talent. It doesn’t surprise me, as I have been following her career since she was in middle school. She is averaging 20.4 points. 5.6 rebounds, 4.3 assists and 4.8 steals per game. Her skill-set and IQ is next level, which passes the eye test. College coaches if you don’t have this young lady on your radar, you need to wake up.

Foster’s game compliments backcourt-mate Harness. Foster and Harness form one of the top backcourt duos in the state, as Foster is capable of scoring at all three levels and facilitating. If she didn’t get into foul trouble so early, I think the game would have been quite different, as her role is huge for the Spartans success this season.

Goseyun stepped up in the game, as she was able to hit clutch shots and make defensive plays. Defenses should not forget about her, as she has a quick release and great shooting stroke. If forgotten about on the offensive end, Goseyun provides reliable scoring ability to compliment her teammates.