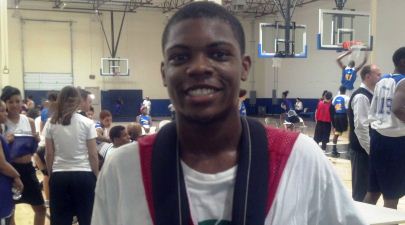 There were 80 seniors at Ron Coleman’s Southwest Showcase on October 14th at Phoenix College.  There were at least 20 Division-II, D-III, JUCO or NAIA coaches in attendance - hoping they could sign some of these seniors.

Here are the remainder of the top 25 players on how well they performed in the 2 games they played ...

Ryan Berg  PG  6’1” 190 Saguaro HS - Ryan is one of the best shooters in his class. His form is flawless and when he gets a clean release on his shot, it’s going in.  He has deep range out to the 3-point stripe.  He also is comfortable with the mid-range shot and is strong enough to take the ball to the hole and finish a lay-up.  He can facilitate if he has to, like a traditional PG, and has good control of the ball to take the ball down and dribble around defenders.  His next step of his basketball progression is shooting off the dribble with a defender guarding him.  He is a D-II to Juco type of prospect.

Devin White  SG  6’4” 185 Marcos De Niza HS - Devin has a good body with a real nice shot and beautiful form.  He has good range on his lefty jump shot, and he has some bounce in his step.  He is not an elite athlete, but he’s solid.  He also is not a selfish player, due to making the extra pass, even in a showcase game.  He seems to just want to win and make the correct play. He is solid on defense as he gives you high effort.  He is a low major division-I prospect.

Rashawn Avery  SG  6’3” 180 Buena HS - Rashwan is a solid scorer on all 3 levels.  He can hit the floater, loves the mid-range and is solid at the 3-ball.  His release is a tad low, but makes most of his attempts.  He also has deceptive quick handles to go by his man and finish his lay-up, or that sweet floater.  He uses his handle to gain separation from his defender to shoot his outside shots.  His defense is solid as he has decent length.  He isn’t explosive, but gets by his man.  He is a D-II to Juco type of prospect.

Ahmad Levon  SG  6’4” 180 North HS - Ahmad is another athletic SG who is very long.  If he gets by his man, he can glide to the hole and finish off an easy lay-up with 1 hand.  He is a very good player when the game is fast and has a high tempo.  In a half-court set, he can shoot the 3 ball or mid range shot.  His handle needs to get a little tighter, so he can blow by his man if he wants to.  He has good length and it seems his best basketball is ahead of him. He is a D-II to Juco type of prospect.

Edgar Sarmiento  PG 5’11” 180  Sierra Linda HS - Edgar might be the hardest working player I have seen this year.  His motor and effort are off the charts.  He is a hard-nosed player on the defensive end, and will sacrifice his body to make a play for his team.  He also is a very good scorer, as he can go by his man, hit the 3 or shoot the mid-range shot.  He also is very good at getting in the lane to drive-and-kick and finding an open shooter.  He had 4 assists in his second game off the event.  He will help a D-II to Juco team next year.

Airen Randolph  SF 6’5” 170 Westview HS - Airen passes the eye test with his body and length. He has big hands and has a 7’0” wingspan, which is incredible.  He also has the ability to hit the mid-range shot and alter or block shots that come near his way in the paint.  If he gets a step on his man, he will lay it in easily or dunk the ball.  He has a little trouble in the half court set scoring with the ball in his hands due to his lack of true handles.  He is a tad raw, but has a few moves down low when he catches a pass from a teammate.  He still has big upside if he puts a few things together and gains some weight to be a productive college player.  He is a D-II to Juco type of prospect.

Khari Holloway  CG  6’2” 190 Mountain Pointe - Khari is a volume shooter with great length and some timely passes.  He can hit the 3-ball or mid range shot, but is not overly efficient.  His handles are solid and he can make other players around him better, which is a great skill to have.  His length helps him on the defensive end to steal away some loose passes.  When he gets a rhythm going, he can be a very good scorer.  He is an under-the rim type player, but can be a creative scorer.  He is a D-II to Juco type of prospect.

Diego Magana  SG  6’5” 175  Desert Mountain HS - Diego is, like Ryan Berg, an elite shooter.  As he was getting ready for his game, Diego hit 14 out of 15 3-point shots.  He has an interesting way of setting up for his shot, as he puts 1 foot way in front of the other, but it obviously doesn’t seem to matter.  He does his work before he catches the ball, as he sets up to get his shot off quickly.  He also knows how to move without the ball for easy lay-ups.  He does have trouble creating a shot for himself, as he has average handles.  He is an excellent student with a 4.3 GPA. Wouldn’t be surprised to see him in the Ivy League schools all the way down to the Juco ranks next year.

Isaiah Cota  PG  6’0” 184 Sunnyslope HS - Isaiah is a quick PG with deceptive overall speed from end to end.  He can turn in the lane very fast with his good first step to make a lay-up or pass it to a teammate.  He has good range on his shot out to the arc.  He hit some deep 3’s, but it seems he is most comfortable from mid-range.  He stays with his man on defense well, and is disturbing the ball handler down the court.  He gives his all on both offense and defense.  He is a Juco type of prospect.

BJ Cuevas  PG  6’1” 180 McClintock HS - BJ is another high energy, effort player with a good motor.  He can get by his man, even though he’s not super quick, and get in the lane to kick it out to an open shooter.  He also can finish his lay-ups or use a nice floater.  His outside shot is average, but he usually just drives to the hole by finding some creases in the lane.  His effort is very high on defense and he will find himself on the ground some plays diving for a loose ball.  He is a Juco type of prospect.

Matthew Oboyle  SG  6’4” 170 Sunrise Mountain HS - Every once in a while a few kids fall through the cracks that you have never heard of and perform well.  Matthew is 1 of those examples.  He scored on all 3 levels in the game I saw, with a couple of 3-point bombs and a few mid-range shots.  He also has some bounce in his step, as he can take it to the hole and finish off his lay-ups with ease.  I’m guessing he will break out his senior year and find himself playing next year in the Juco ranks.

Here are 5 other players that have a chance to play in college next year: