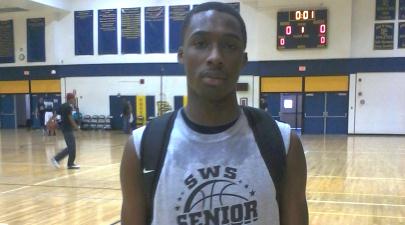 There were 80 seniors at Ron Coleman’s Southwest Showcase on October 14th at Phoenix College.  There were at least 20 Division-II, D-III, JUCO or NAIA coaches in attendance - hoping they could sign some of these seniors.

Here are the top 25 players on how well they performed in the 2 games they played ...

Jaron Hopkins  SG  6’5” 185  Dobson HS (Univ. of Colorado commit) - Jaron was not only the best player at this event, he also just happens to be the best player in the state.  The scary thing about Jaron is that he’s improving almost weekly.  People have always said he needs to work on his jump shot, and it clearly shows he has been working on this part of his game.  He hit many mid-range to 3-point shots in the 2 games I saw.  His body is more balanced when he attempts his shots.  He isn’t forcing any poor shots, and, of course you still get the sensational dunks and flashy passes to go along with it.  His length and speed help him in the passing lanes to get some steals and blocks.  He is headed to Colorado next year.

Richaud Gittens  SG  6’4” 190  Marcos De Niza HS (Weber State commit) - Richad is a smooth lefty with a killer instinct on offense.  He actually scored 30 points in his game 2 blow out.  He did it on all 3 levels, and he did it with style.  He had some monster dunks on the break and he hit 4 3-point bombs.  His stroke is very compact with no wasted movement.  He has a very good first step to go by his man and elevate to finish up a lay-up or dunk.  He also is a very good mid-range shooter.  His handle is tight, and he has a lot of potential on the next level.  He is headed to Weber State next year.

Jalen Richard  SG  6’3” 185  Poston Butte HS (Santa Clara commit) - Jalen is the strongest guard in the class with shooting range out to the 3-point stripe.  He has a quick first step with his left or right hand, so he can get to the FT line at will.  He also elevates the highest on his jumper, so no one can block his shot, even if you are trying to defend it.  He is a tad streaky, but from mid-range he’s at his best.  He also does well on the defensive end, as he can stay with his man and be a tough physical defender. He is headed to Santa Clara next year.

Damian Mendoza  SF  6’5” 170 Sierra Linda HS - Damian is 1 of the most athletic players in the class.  He can dunk from almost anywhere.  He has solid handles to move over and play the 1 or 2 position also, which makes him more versatile.  He can go by his man and finish the lay-up, dunk or nice floater.  He has range out to the arc, but seems more comfortable with the mid-range game.  He will have to work on being more consistent with his 3- ball.  He is also is a very good defender with his length and can come from the weak side and block some shots.  He will have to put on some weight for the next level of play.  He is a low major to Division-II type of player.

Jonah Legg  SG  6’5” 202  North HS - Jonah has a solid strong body for basketball.  He is a fairly long player who can do many things offensively.  He has an amazing 1st step crossover to get by his man and finish near the rim.  He has 3-point range, but is truly a great mid-range shooter.  He hit many mid-range shots with defenders in his face.  Once he goes by his man, he sometimes gets a little lazy and doesn’t finish as hard as he should.  He needs to be more efficient to get to the top SG’s level.  He is a low-major to Division-II type player.

Desmond Ross  SG  6’3” 190  Kellis HS - Desmond has a solid frame with long arms.  He can score on all 3 levels, but usually prefers to use his handle to set up a jump shot.  He has 3-point range, but loves the mid-range game.  He rises up extremely high on his jumper to get his shot off without being blocked.  On the break, he can throw down some dunks, as he is very athletic.  His defense is solid due to his length and it would help him to become more of a facilitator to further his overall game.  He is a D-II type of player.

Jonathan Wilson  PF  6’6” 185 Independence HS - Jonathan is a real long PF that is very comfortable down low.  He has many moves in his repertoire to score in the paint.  When players go near the paint he swats away their shots when he’s on defense.  He had an impressive block on Hopkins, which is not easy to do.  He also anticipates the passing lanes well to get a bunch of steals.  Outside the paint he has shooting range to the FT line, but he will need refinement to extend his range and further his game.  He is a D-II type of player.

Jeremy Verhagen  PF  6’10” Florence HS (Grand Canyon commit) - Jeremy is a stretch 4 that has 3-point range with a high IQ. He has beautiful form on his shot and likes to work out of the high post.  From there he can shoot his mid-range shot or find any cutting players for an assist.  He also is a solid shot-blocker down in the paint.  He needs work on his body and needs to gain confidence in the paint.  As he fills out his body with more muscle, he will improve his game overall.  He is headed to Grand Canyon next year.

Avery Brunson  SG  6’3” 175  Desert Vista HS - Avery is a good all-around player that has nice handles.  He is very comfortable with the ball in his hands - making plays for others or scoring for himself.  He has a very good 1st step to go by his man to pass or finish.  He’s athletic enough to finish at the rim.  He also is a very solid shooter out to the 3-point stripe.  He hit a few deep balls in the 2 games I saw him.  He is a true team player and tries hard on defense with his solid length.  He is a D-II type of player.