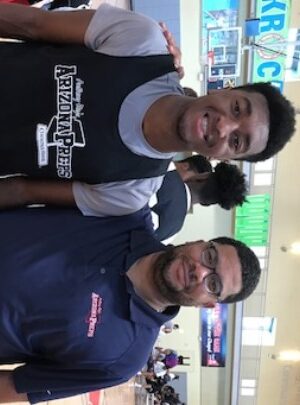 The Southwest All-American Camp took place this past weekend on the campus of the Salvation Army's Kroc Center, and did not disappoint - creating an amazing atmosphere for some of the top prospects in the Southwest to showcase their skills in front of a nice crowd of scouts and media in attendance.

This year's first annual event was one to remember, as many of the top basketball scouts/media in the West attended the event for both days.  Such top-rated scouts/media as Josh Gershon (Scout Hoops), Gerry Freitas (The Hoop Review), Chris Karpman (ASU Rivals.com), Roy White (West Coast Hoops), Ryan Silver (West Coast Elite), Jeff Meadows (Hoops Report), Derek "DJ" James (Arizona Preps/Arizona Hoop Review), Michael Clark (Arizona's Finest MixTape) and, of course, myself and Gregg Rosenberg (Arizona Varsity / AZ Prospects.net) were all in attendance for the event - making for maximum exposure for each of the camp's participants.

The venue at the Kroc Center was perfect for this year's event, as the staff from the facility were hard working and the size of the (3) full courts was perfect in size for such a camp.  The spacious Kroc Center gave the camp an All-American feel, while the organization of the event and the skill development included took the event to another level for the spectators and camp participants.

The event was absolutely loaded with talented prospects for the future and many lesser known prospects made a name for themselves at this year's event.  As a result of this year's event, each prospect had an opportunity to gain maximum exposure to college coaches through the many quality scouts and media that was in attendance for this year's event.

The event also had some star power, as such top-rated national prospects as Kyree Walker of Hillcrest Prep (Arizona State commit) showcased his talent in the event - fresh off his commitment to the ASU Sun Devils.  Walker (pictured) played the game unselfishly and showcased his love for the game of basketball.  Other top-rated prospects such as Shadow Mountain's Jaelen House and Javon Blacksher, Nikc Jackson (Rancho Solano Prep), Saguaro's Jared Martin, Jalen Townsell (Spanish Springs HS-NV), Desert Vista's Christian Anigwe, Mesquite's Xavier Dusell and Jaden Lee, Walter Talley (Tri-City Christian) and many others all showcased their talents in the event as well.

I really enjoyed partnering with Gregg Rosenberg (Arizona Varsity) on this year's event, his first event and the first time we have worked together.  Rosenberg is a class act and as hard-working an individual as I have met in the business.  His tireless commitment to Arizona basketball reminds me of myself many years ago, and has given me new vigor for the future.  Gregg started with me and Arizona Preps years ago, and now together again it looks like we are the right combination, with the help of others, to raise Arizona basketball to another level, while also creating more opportunities for lesser known prospects in the Southwest.

Overall, this was an amazing event and we are very excited to bring it back next year - bigger and even better!  I look forward to seeing the recruitment opportunities that this event will bring to all those that were involved.