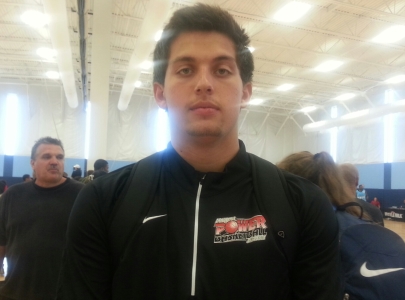 South Mountain Junior College got a very nice boost to their team this season over the winter break when 6-foot-8, 240-pound freshman post James Sosinski became eligible to play.  Since becoming eligible, Sosinski has produced at a high rate and has seen his college recruitment begin to soar.  Today Sosinski received a scholarship offer from a PAC-12 program.

Almost as fast as Sosinski has emerged in the ACCAC this season, he has began to see his college recruitment begin to soar.  With numerous colleges already expressing interest in him, today Sosinski received an offer from Washington State University, as assistant coach Silvey Dominguez extended an offer to him.

Dominguez will also watch Sosinski play on Wednesday evening when he leads South Mountain on the road at Cochise JC.

Sosinski recently transferred from UMASS, after red-shirting as a freshman for the football team.  In high school, a graduate of Hamilton HS, Sosinski was a quarterback for the top-rated high school football program in the state.  Now Sosinski has decided that he will play collegiate basketball for the remainder of his college career.

Sosinski is a true power forward prospect that enjoys physical contact and prefers playing physical.  He is a wide-body and a strong rebounder on both ends of the floor and gets good inside position.  He has become a much better scorer since the high school ranks, since he is very skilled for his size.  His true value on the basketball court comes from his ability to rebound hard and put his body on someone.  He is also a good low-post defender.  He runs the floor hard and with good determination, and is a very good finisher inside the paint.

Currently, since being injected into the South Mountain lineup, he is averaging a very impressive 24 points and 15 rebounds per/game.  While South Mountain has struggled this season, after winning the Division-II conference title last season, Sosinski will make the team much tougher for the remainder of the season.

It is still unclear as to when Sosinski will make his college decision, but with a high-major PAC-12 offer on the table, a commitment could come soon for him.

Arizona Preps will continue to follow his recruitment and performance this junior college season very closely, and bring you any updates as they continue to develop.