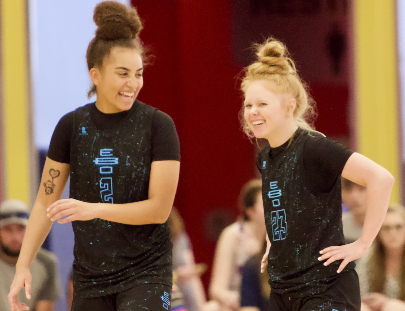 The sport of basketball is more than just a sport, often times and for many. The sport can create many opportunities for student-athletes - providing an opportunity to develop character, discipline, life skills and even close personal friendships and relationships that often last forever. For Arizona top-rated senior girl's prospects, Boulder Creek High School's Kayla Clark (Southern Utah signee)and PHH Prep's Amoret Maxwell (Southern Utah signee), basketball has been the binding force that has brought these two young women together. While both of these two young ladies did not know one another previously, these two excellent ballplayers have formed an amazing bond through the sport, and through their college recruitment - an amazing experience and fact that will change their lives forever.

Kayla Clark was a superb standout performer throughout her high school career at Boulder Creek High School in Northern Arizona's Anthem community, while Amoret Maxwell soared as a basketball prospect, first with two-time State Champion Millennium High School, before then changing programs and competing at a high level for the amazing PHH Prep girl's program. While both prospects were among the elite performers in Arizona's 2021 Class, they did not know one another at all personally, but instead as competitors on the basketball court. Both young ladies worked diligently on their crafts in an attempt to improve their college recruitment. As both prospects ultimately landed scholarships at Southern Utah University, their accomplishments and success on and off the basketball court brought them both together.

"They knew of each other and competed against each other in years past, but when they both learned they were headed there (Southern Utah) this spring, they played club together for the spring and summer sessions and did amazing - winning many tournaments," said Aaron Clark, Kayla's father and club coach for the past (12) years.

While playing for EBO Arizona (Elite Basketball Organization), one of the top club organizations in the country for girls and boys basketball, the team won numerous events. From April through July, the team won (4) out of (7) tournaments they competed in, and finished runner-up in (2) of them - appearing in (6) out of (7) Tournament Championships.

While these two top prospects once competed against one another, through their college recruitment to Southern Utah, they now have played together on the court, and have become close friends off the court. In fact, Kayla and Amoret will now be rooming together in college this summer and school year in Cedar City, Utah. Amazing fact. While they didn't know each other much in Arizona, they now will come together in Utah - all through the sport of basketball.

"Playing with Ammo has been one of the best opportunities I have had," said Kayla Clark. "I'm very blessed to be able to take on SUU with her. Not only have we grown to be best friends, but I know how much potential she has, and I'm excited to watch her grow and succeed as both a player and a person. She has a bright future ahead, and I'm glad I get to be a part of a little piece of it."

"Playing with Kayla back in AZ was amazing, especially knowing we were going to the same school, but it was also great because we are going into college with great chemistry together," said Amoret Maxwell. "During the summer I was able to make Kayla one of my best friends. Going to play with each other at SUU is a dream come true, because not very many people get to go to college with their best friends. It is great knowing that I'm not alone, and it's like we have an advantage knowing the chemistry we have playing together."

Basketball, as all sports, creates lasting relationships and friendships that can help mold us and also provide an atmosphere for top student-athletes to share experiences and goals for the futures. Also joining these two top performers on a senior-laden team were other top-rated girls prospects Ally Steadman (Pepperdine signee), Bridget Mullings (UCSD signee), Shayla O'Neil (Point Loma signee) and Violet Toon (Ottawa University).

"The concept of the team was to give signed seniors, whose summer camps were pushed later than normal due to COVID, a chance to run and continue to experience competition," said Aaron Clark. "You can train every day, but there is nothing like live game action. If you take off for 3 to 4 months from that, you can lose a lot. For the girls, it was a victory lap, It was nice to allow them the chance to play and develop pieces of their game they wanted to work on - in game, without having to worry so much about winning."