South Mountain Is Back! 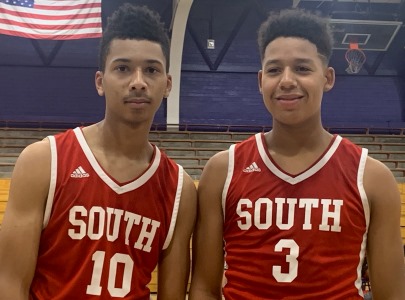 South Mountain is back! Under the leadership of one of the program's best basketball prospects of all-time, if not the best ever, Brian Fair, the basketball program at the school has gone to a completely new level, and this season should be the Jaguars' best chance in recent years to win a state title. Fair is one of the state's best ever players and performers - leading South to an undefeated 32-0 record in 1991. Fair would sign a tremendous basketball scholarship with then defending national champion UCONN, in what was a major accomplishment nationally around the basketball community. Fair would go on to have a terrific career at UCONN, and since has returned to South Mountain HS, where he is now the school's athletic director.

Fair brought in a very talented and hard-working Head Coach for the basketball program, Jeremy Soria, who has done a lot to take the basketball program to another level as well. Soria is the son of current TCU Associate Head Coach Tony Benford, who also spent a lot of time at Arizona State University. Soria's intense coaching style and love for his kids has raised the overall level of play and production on the basketball court by the program. Soria and assistant coaches Erik Hood and Derahn Stinson make up one of the most talented coaching staffs in the state. Hood is one of the best basketball players to play the game from Philadelphia, and his extreme knowledge of the game and intensity level have benefited the program a great deal as well, and he has been an excellent compliment to Soria.

This year's team, while still young, is absolutely loaded with top-rated young talent, and returns a trio of guards that are among the best in the state, starting with one of the state's most dynamic performers, 5-foot-11 junior guard Zay Freeney. Freeney is a big-time young guard prospect with an excellent feel for the game and a unique ability to make plays off the dribble.  He has a quick and superb handle of the basketball, with very good explosion off the dribble, which allows him to finish plays in the lane and also create scoring opportunities for others.  He has a nice shooting stroke with range and a quick release on his shot.  He is a natural scorer of the basketball, and is very fun to watch when he gets it going.

Freeney will team up with one of the state's top young shooters and scorers of the basketball again this season, 5-foot-11 sophomore guard DeOtis Nunn. Nunn is an instant bucket and has never seen a shot that he can't take or make. I absolutely enjoy watching this young man shoot the basketball, and he will have a big breakout season as a sophomore, after a strong freshman season where he averaged double-figures. Nunn is a big-time shot-maker and will make the South Mountain backcourt very difficult to defend this season and as explosive a backcourt as we will see this season.

5-foot-11 senior guard Kyree Ware will also provide excellent depth in the backcourt for the Jaguars, as he was among the team's top scorers last season as a junior. Ware is an athletic guard prospect that also provides excellent quickness and defense on opposing guards.

I am very excited about the development and promise of 6-foot-7 sophomore post Damarion Pouncil, who is now coming into his own a great deal and had an excellent spring and summer for himself. The emergence of the talented young prospect will mak a tremendous difference this season for South, as their gifted backcourt will keep them in every game. The ability of Pouncil to block shots, run the floor at a high level and finish atrong around the rim will help this South group have a very balanced attack this season. Puncil is one of the best young prospects in Arizona's 2022 Class.

South Mountain will play a fast, high intensity level of play this high school season that is motivated by their ability to defend and get out on the break. Teams will have serious problems matching up with the team this high school season, and the Jaguars will be a definite threat to win their first state title in the state's 5A Division, since David Grace (Vanderbilt University) led the program to a state championship in 2006.

Under the advanced leadership of Brian Fair and Jeremy Soria, the South Mountain Jaguars are now back and ready to make serious noise in Arizona basketball once again. Recently, South Mountain HS 2014 graduate Zylan Cheatham signed a contract with the NBA's New Orleans Pelicans, something that the South Mountain fathful can be certainly proud of as well. Watch out for the Jaguars this season and in the future.